From about $65,000, the price of Bitcoin plummeted almost 87 percent on Binance’s U.S.-based exchange Thursday morning, falling to as low as $8,200 from as high as $65,000. On other exchanges, the price did not behave in this manner, and on Binance, the price nearly quickly returned to where it had been before.

According to Binance.US, “one of our institutional traders informed us that they had discovered a flaw in their trading algorithm, which seems to have been the source of the sell-off.” Despite the fact that we are still investigating the incident, we have received confirmation from the trader that they have now addressed their problem and that the issue seems to have been handled.

According to the Binance.US website, the drop happened at 7:34 a.m. New York time. The amount of Bitcoin traded on the exchange in that minute was 592.8 Bitcoin, which is worth slightly short of $40 million at the current market rate.

Mistakes like these occur often in the financial industry, for example, when traders input incorrect information about their planned transactions, such as the erroneous price or order size. To provide one example, one incorrectly big transaction may overload an exchange’s order book, resulting in a rapid and significant fall in the stock market’s value. 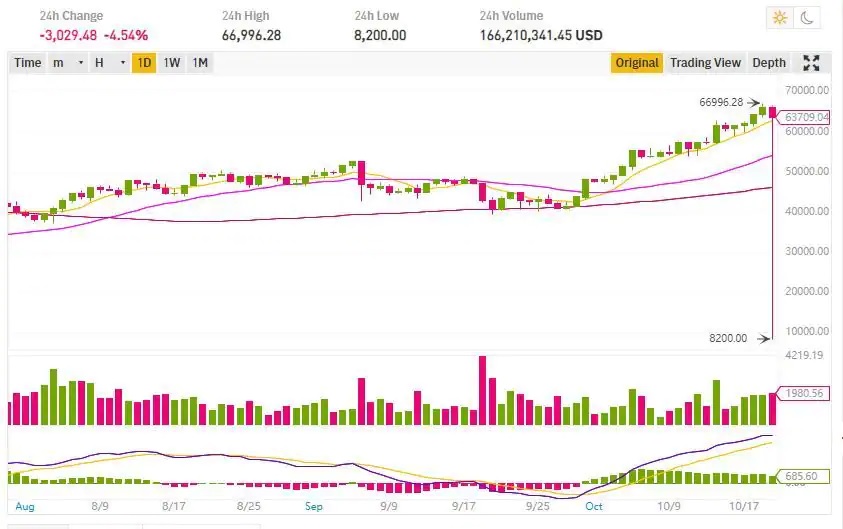 Back in May 2010, the whole United States stock market saw a spectacular flash collapse, but stocks have mostly avoided difficulty since then.

This is the latest in a series of high-profile trading issues that have occurred recently in the cryptocurrency market. A new decentralized exchange, Synthetify, was forced to stop down for a period of time earlier this month, only a few days after launching, due to inaccurate data supplied by the Pyth Network, a pricing feed supported by some of the world’s most well-known trading and exchange companies.

Pyth malfunctioned once again in September, giving the false impression that Bitcoin had dropped by 90 percent in value.