On the first day of this month, cryptocurrency market attempted to rebound, with Bitcoin (BTC) reaching $50,000, from the low of $44,000 hit last week. As Bitcoin made attempt to recapture lost ground, altcoins followed suit.

Data provided by CoinGecko indicates that the price of Bitcoin gained about 17% from the low of $43,504 recorded on February 28 to hit $50,000, which crypto bulls are trying to establish as major support.

Earlier yesterday, MicroStrategy CEO Michael Saylor tweeted that his firm had bought another $15 million worth Bitcoin, taking its overall holdings to 90,859 Bitcoins. Through the purchase, the firm also signaled continuing interest of institutions in the numero uno crypto, with huge chunk being bought in every dip.

A study of main Bitcoin price indicators also indicates that bulls were willing to purchase Bitcoins at $43,000 levels, which was seen during the weekend. The cryptocurrency’s rise over $49,000 has encouraged some analysts to forecast fresh all-time highs in the days ahead, but as per experienced analyst Peter Brandt, there is no certainty in crypto market.

Interestingly, yesterday, Goldman Sachs stated that it would reopen its cryptocurrency trading desk. Through a chart Brandt responded with a tweet indicating that its launch did not augur well for the crypto market in 2017.

David Lifchitz, CIO (Chief Investment Officer of ExoAlpha), opined that it is hard to say whether the retracement of Bitcoin has completed, but $44,500 seems to be providing solid support. 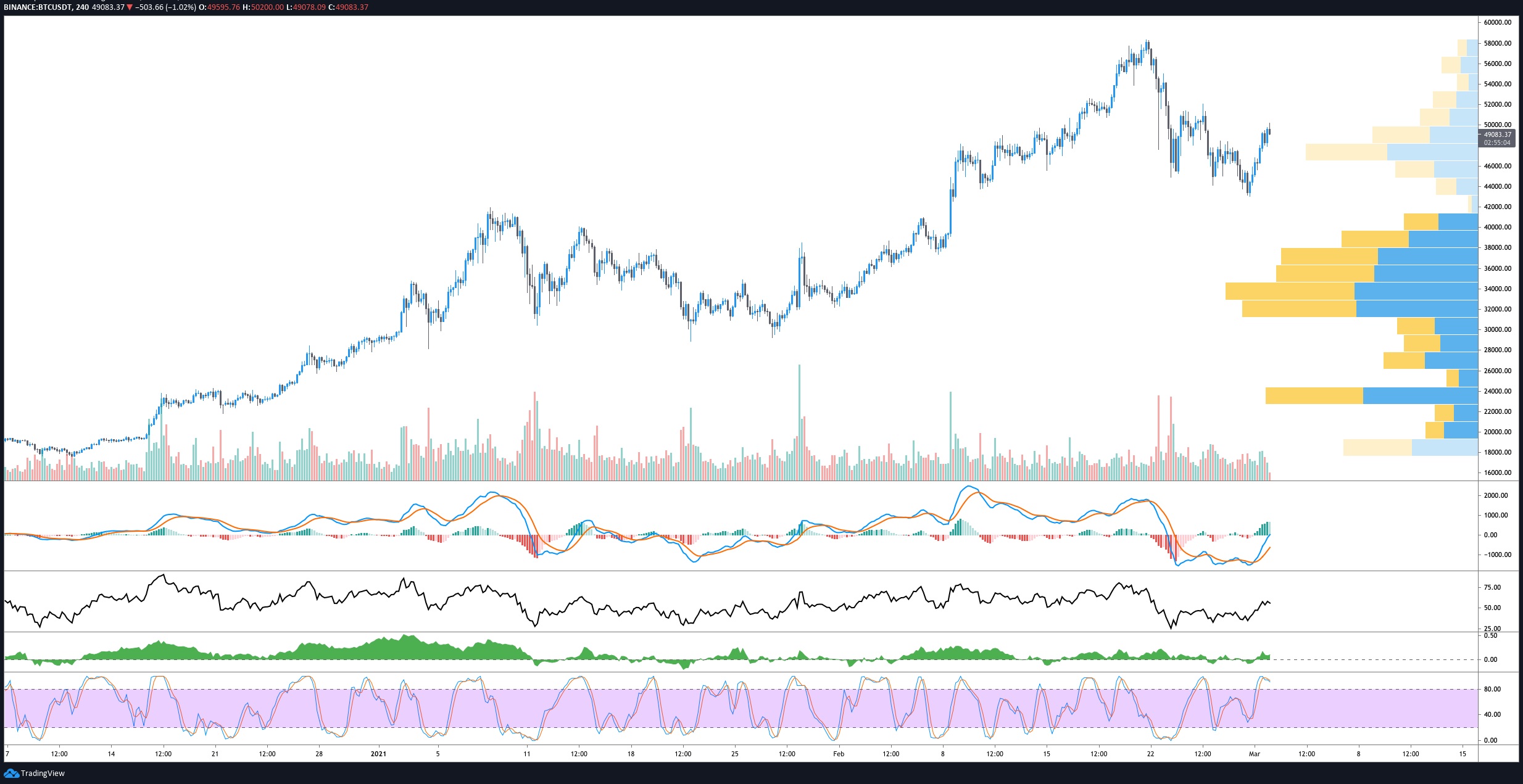 With respect to whether the number one crypto could break above fresh highs in March, Lifchitz stated that he is not sure as to what is going to take place in March as it is historically a bearish month for Bitcoin. As per Lifchitz, the US tax season could keep the market bearish as investors may require to “sell some of their holdings to pay for earlier realized capital gains.” 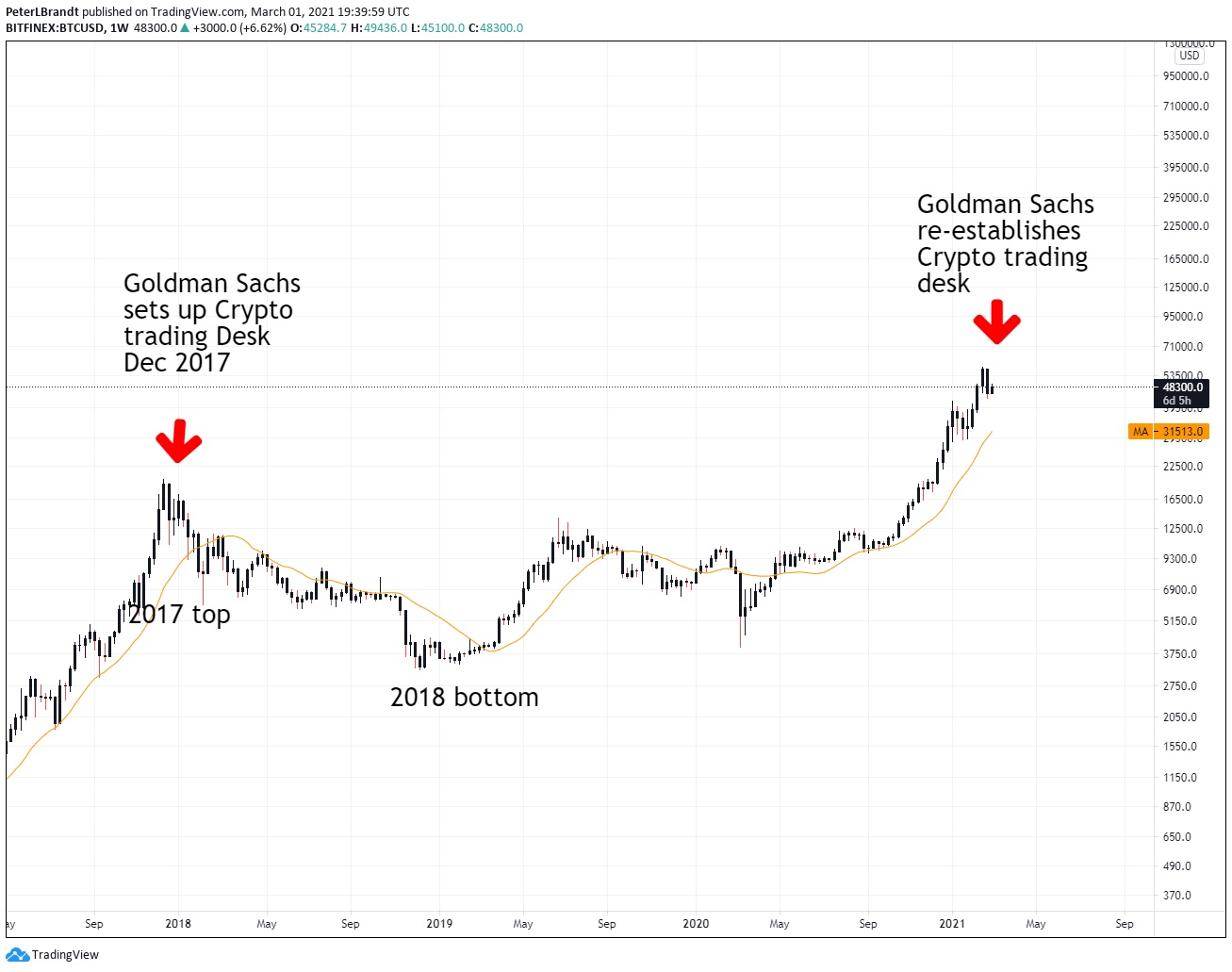 From a bullish point of view, the 20% price correction in the second part of February may have hinted an early onset to the normal March sluggishness, with the worst yet to come.

“Despite the 20% pullback, we’re still in an upward sloping trend since the October $10K breakout. The big unknown is what the miners will do as they are net sellers. They are the real short-term risk.” 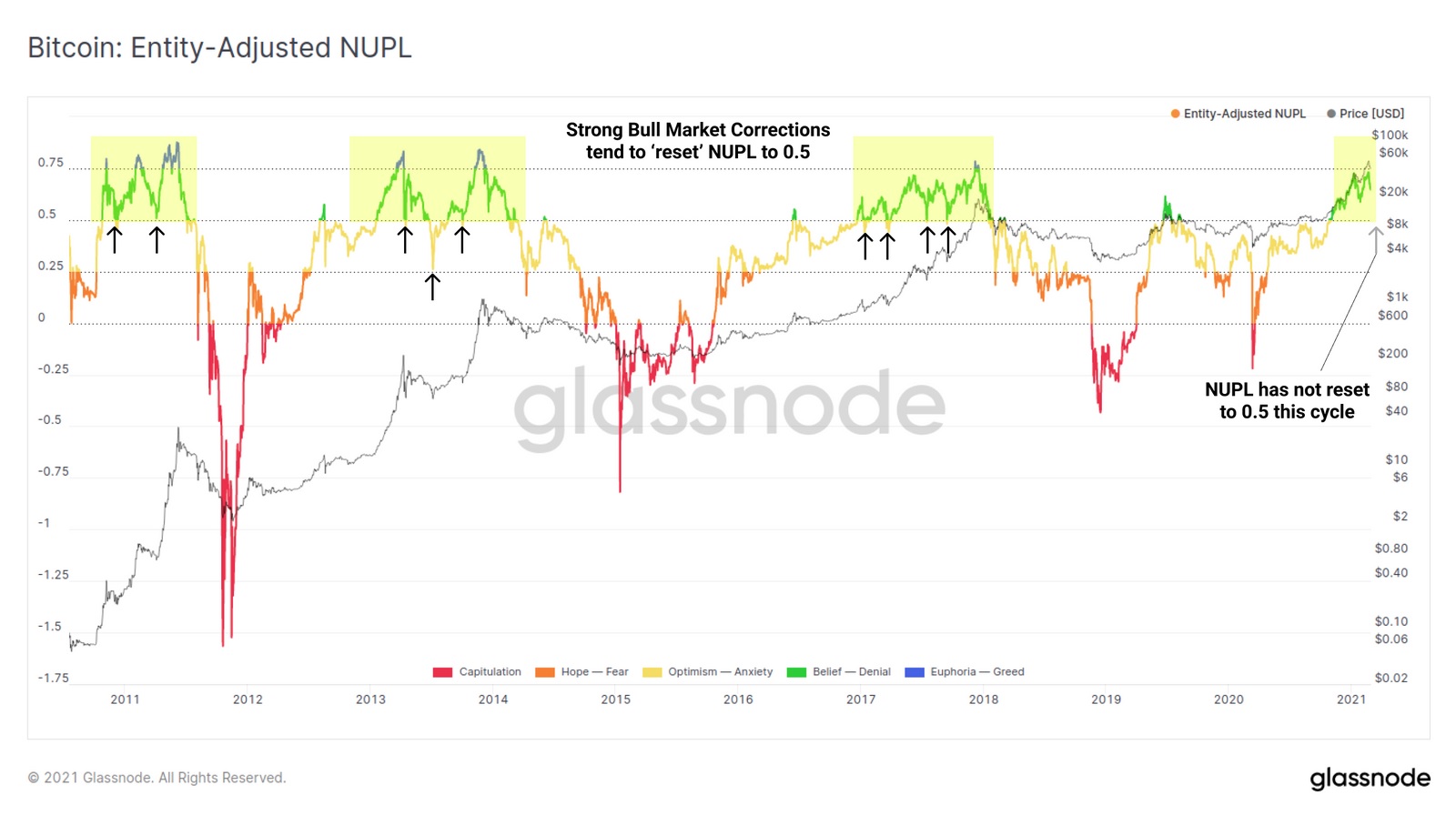 A study of Glassnode’s Net Unrealized Profit and Loss (NUPL) indicator reveals that even though both price corrections of 20% seen during this rally have formed the “signature sideways and choppy”
price movement usually seen during big rallies, buyer continue to enter quickly in comparison to earlier bull cycles and only a hand full of long-time investors are interested in selling their holdings.

Currently, the aggregate cryptocurrency market cap is $1.53 trillion and Bitcoin’s dominance rate is 61%.