Cryptocurrency and financial market analysts in general believe that there “too much money to spend,” and this will provide the necessary thrust for Bitcoin’s (BTC) next rally. Jeroen Blokland, portfolio manager at asset management company Robeco, in a blog post, has stated that the US M2 money velocity has hit record lows.

M2 money velocity refers to the speed at which fiat currency travels around the economy and this year has seen a sharp decline in the metric.

Blokland, in his blog post, wrote “Theoretically, the velocity of money rises when economic activity increases. While the sudden economic stop obviously resulted in much lower economic activity, the sharp decline also suggests there is just too much money to spend. A quick look at central bank balance sheets confirms this.”

The eyebrow raising money printing measures taken by the US Federal Reserve was the highlight of Mach, when Covid-19 pandemic triggered a cross-asset market selloff. Interestingly,

The record expansion of central bank (G4 countries) balance sheet has taken place along with increases in price of safe haven assets such as gold, silver and Bitcoin.

According to PlanB, the quant analyst who created Bitcoin’s stock-to-flow price predicting models, the slowdown in money velocity will only act to quicken the numero uno cryto on it path to latest forecasts, an averge of $288,000 by 2024.

The stock-to-flow cross-asset model (S2FX) goes through several stages of Bitcoin as an investment vehicle, and the price target of $288,000 makes up the last stage.

In March, through a tweet, PlanB issued an explanation on chart:

“S2FX: $288k is the cluster center (S2F-marketvalue centroid) of next phase, like $6700 was the cluster center of last/current phase. We don’t know exactly (yet) when phase 5 starts and ends, but looking at past clusters: roughly 6 months after 2020 halving, until 2024 halving+6m.”

S2FX: $288k is the cluster center (S2F-marketvalue centroid) of next phase, like $6700 was the cluster center of last/current phase. We don’t know exactly (yet) when phase 5 starts and ends, but looking at past clusters: roughly 6 months after 2020 halving, until 2024 halving+6m. pic.twitter.com/2moLsL6tvj

In the meantime, Blokland cautioned about the effect of low velocity on monetary policy. The Fed is expected to raise its inflation target to a maximum of 4% this week. 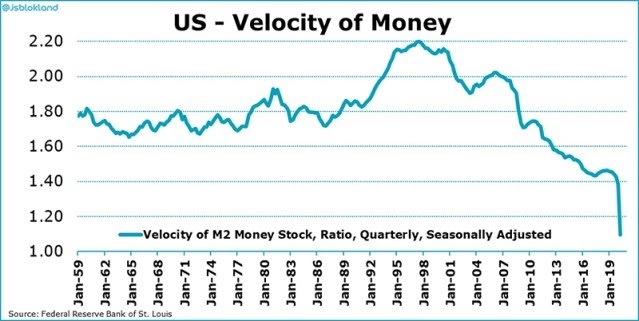 Blokland further stated “The low velocity of money also means that even more money is needed to create inflation. So far, however, this has only resulted in asset price inflation.”