Starting on 1 January 2020, the Federal Aviation Administration (FAA) has authorized the US to use a new surveillance system–Automatic Dependent Surveillance Broadcast (ADS-B)–to publicly telecast the identity, position and other details of aircraft.

That has raised security concerns among stakeholders, Reisman said in his paper, explaining that the ADS-B system “does not include provisions for maintaining these same aircraft-privacy options, nor does it address the potential for spoofing, denial of service, and other well-documented risk factors.”

Civil aircraft firms would prefer keeping some data private, for example, to effectively counter tracking executives as part of the enterprise spying operations.

Military aircraft traffic data, meanwhile, is defined by the Department of Defense as “Information that, if disclosed, would reveal vulnerabilities in the DoD critical infrastructure and, if exploited, would likely result in the significant disruption, destruction, or damage of or to DoD operations, property, or facilities.”

Considering the sensitivity of related air traffic data, the military need for confidentiality “is likely to remain decisive in their adoption and use of ADS-B,” Reisman writes. 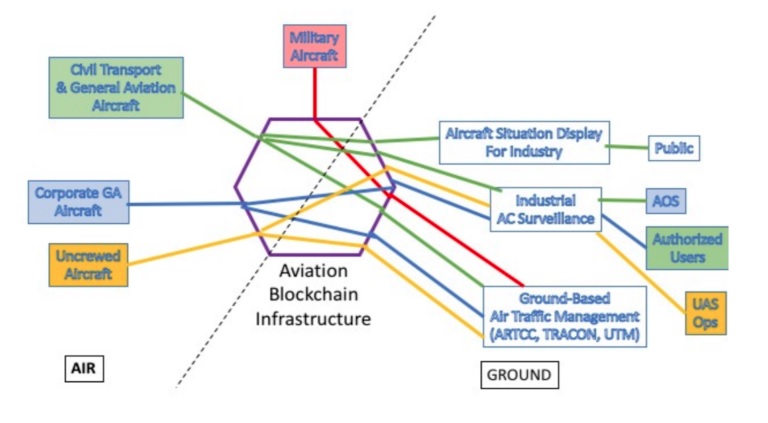 In order to address this and many other issues, the researcher introduces a prototype in the paper, known as the Aviation Blockchain Infrastructure (ABI), based purely on Hyperledger Fabric and smart contracts, which enables the public or private sharing of data with permitted entities.

For example, aircraft “state information” such as altitude, airspeed, heading, etc. could be stored securely through a separate channel, while flight plan data such as aircraft type, origin, destination, fly route, etc. can be released on a public network for complete access to authorized members.

“We propose to use a ‘lightly permissioned’ blockchain framework to enable the ADS-B systems to meet or exceed the same levels of privacy and security currently provided by radar-based systems in the NAS [National Airspace System].”

This isn’t the first time NASA has been looking for technological advancements in blockchain. In February, the agency awarded $330,000 to a professor at Akron University to fund research into ethereum blockchain technology to track wreckage automatically.