The price of cryptocurrency Enjin, which represents blockchain based gaming and NFT centered venture, has rallied over 30% in the past 24 hours. There are three key criteria behind ENJ’s stunning rally in recent times: Coinbase listing, underlying momentum and rising interest about JumpNet.

The price of ENJ has started rising last month after the venture announced the roll out of Efinity and JumpNet. The crypto token ENJ received another thrust when the US headquartered cryptocurrency exchange Coinbase announced the listing of ENJ.

Furthermore, the VORTECS™ score, owned by Cointelegraph, turned green just before the uptrend began, as indicated in the chart below. The indicator is based on a algo comparison of past and current market conditions obtained from a chunk of data such as trading volume, market sentiment, Twitter activity and latest price movements.

“Starting immediately, we will begin accepting inbound transfers of 1INCH, ENJ, NKN, OGN to Coinbase Pro. Trading will begin on or after 9AM Pacific Time (PT) Friday April 9, if liquidity conditions are met.” 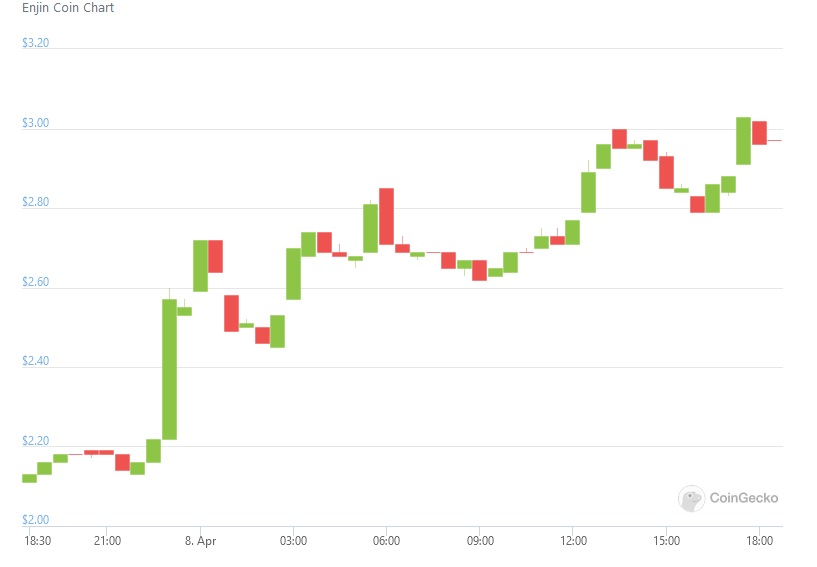 In general, a listing on Coinbase acts as a catalyst for altcoins as it paves way for the asset to get introduced in the US retail market. Enjin is also rolling out two major products in the forthcoming months: JumpNet and Efinity.

Efinity, being a gaming and NFT-centered blockchain, is hosted on Polkadot. It would be the foremost blockchain network that is completely optimized for non-fungible tokens. As there is considerable hype about NFTs and the industry is quickly expanding, the interest in Efinity is growing at a rapid pace. 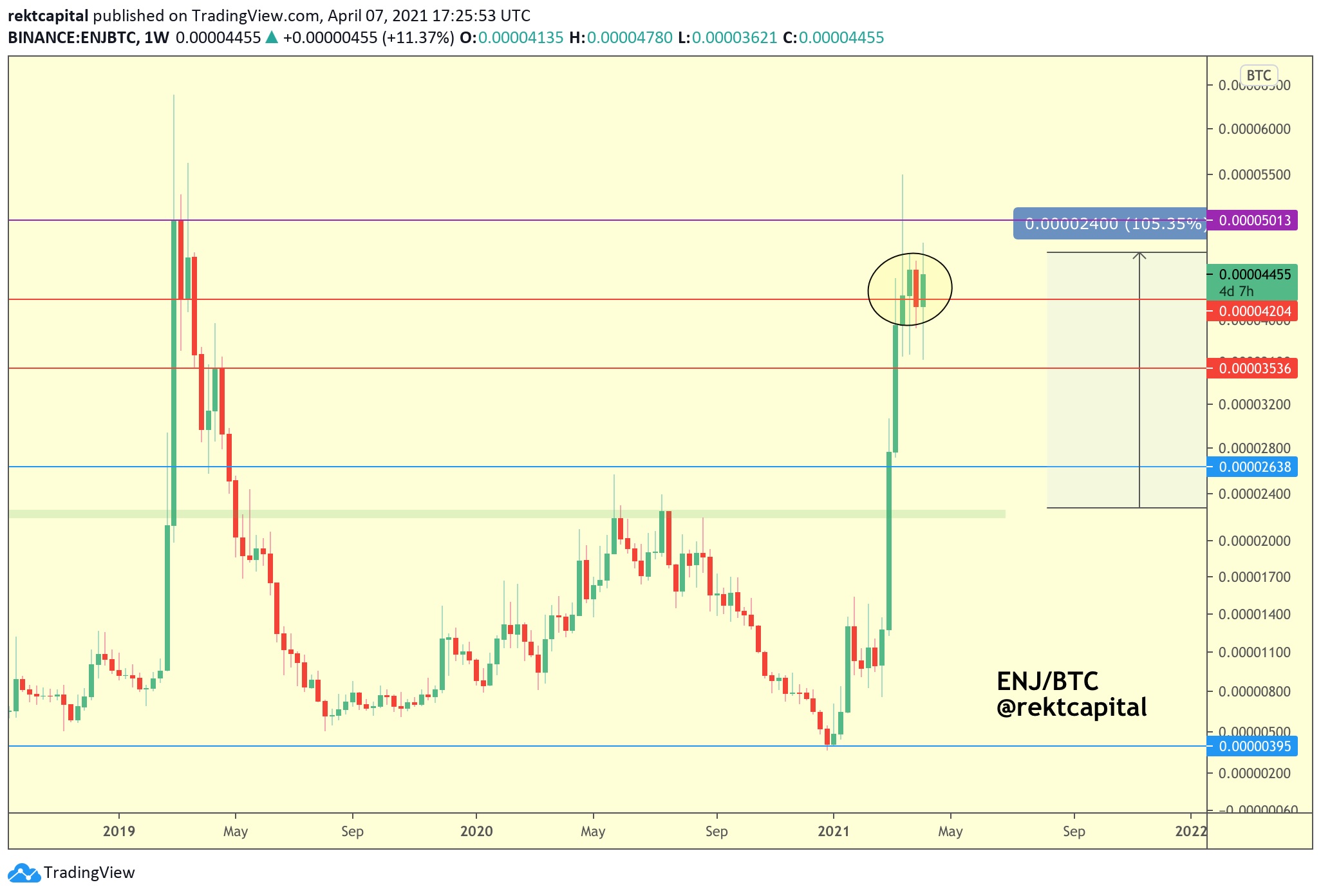 “Minting NFTs on legacy networks is expensive—financially and environmentally. Polkadot has been designed to solve these structural shortcomings, providing a platform for launching the kind of production-grade infrastructure Efinity represents for NFTs: cheaper for creators and cleaner for the climate.” 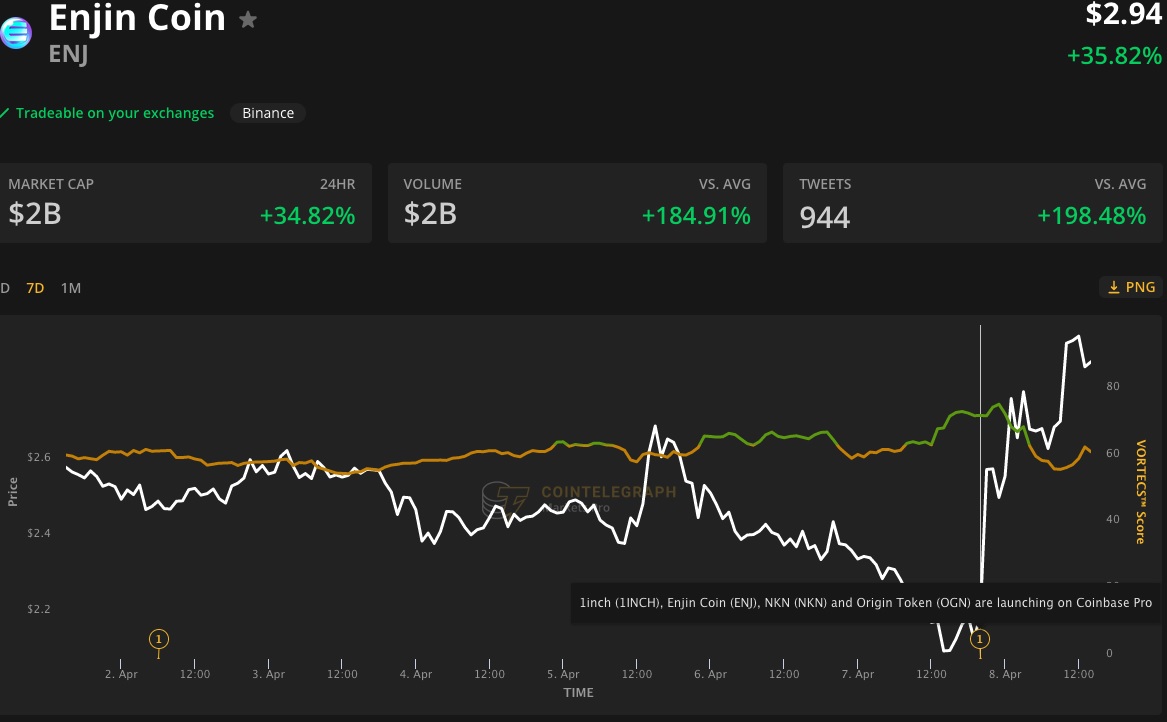 Enjin is also rolling out JumpNet, a layer-two scaling system for Enjin. JumpNet permits users to conduct transaction utilizing ENJ on gaming platforms with quicker and cost-effective transactions, which is anticipated to enhance the gaming experience.

Mike Abundo, the committee chairman of the Fintech Philippines Association, opined as follows:

Good luck to the @Enjin community on the launch of JumpNet!

That means you could throw your favorite streamer a powerful @Enjin sword right when they need it in battle, then throw them $ENJ when they win. pic.twitter.com/XAPF1p3tRD

As per an unnamed trader Rekt Capital, ENJ is nearing the completion of a “bull flag” pattern on charts, against Bitcoin, following the breakout earlier today.

Despite the downside volatility, ENJ is still showcasing price-strength confirmation at this level

Interesting to see if ENJ forms a Bull Flag around these levels, as price has been moving sideways along this local red support for weeks https://t.co/LEMfEnz2SM pic.twitter.com/BkdMrRD5a9

In case the price of ENJ sustains above the level of $2.50, the chances of another round of uptrend is higher in the short-term.