According to a research report from Chainalysis, blockchain focused forensics company, the probability of African crypto traders sending or receiving tokens from addresses linked to scams is pretty low, in comparison to traders in other regions. The survey signifies the scenario last year.

In the document titled “2020 Geography of Cryptocurrency Report,” Chainalysis states that the proportion of illegal cryptocurrency operations is not big in Africa, in comparison to other regions across the globe.

Illegal cryptocurrency operations represented only 2% of the region’s approximate trading volume of $16 billion between July 2019 and June 2020. Scams represented 55% of illegal activity, which is very low in value terms.

“People in many parts of Africa have fallen victim to financial scams common in the fiat world, such as pyramid schemes and other investment scams.”

“While scams still make up a large portion of illicit cryptocurrency activity in Africa, the share isn’t as high as it is elsewhere.”

Nevertheless, in Eastern Europe, where illegal dealings were six times higher than Africa’s figures last year, there is a likelihood of greater number of people falling for crypto pyramid programs and “giveaways.”

Likewise, darknet activity is considerably higher in Europe. East Asian traders, according to the report, are most likely to fall for scams, with 86% of overall swindled (by Africans) crypto coming from that region. 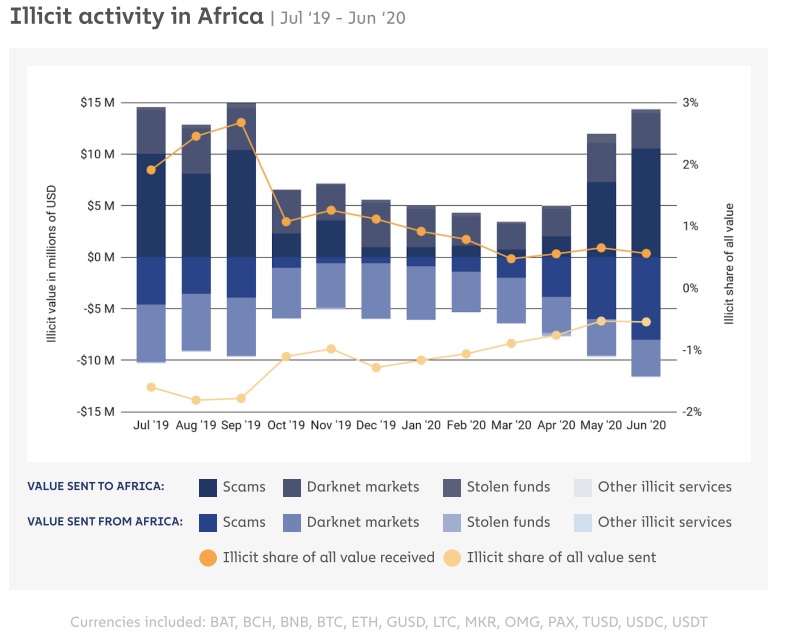 Obviously, the report will be a surprise as Africa is often linked to Ponzi schemes.

There is no substantial evidence, but the report indicates that better awareness about scams has made it complicated to persuade African users to look at cryptocurrency platforms such as Paxful, implying those who are courageous enough are likely knowledgeable about likelihood of scams.

Increasing knowledge about cryptocurrency education is yet another reason. Tanya Knowles, Binance South Africa country manager, stated in March that a good strategy that can be adopted by cryptocurrency traders in the country is to “ensure there is education around scams… we need to get the basics in place before we open it up and say, go wild and start trading.”

Interestingly, a victim of crypto scam is now an advocate of blockchain and crypto education in Africa. Doris Ojuedeire established the non-profit organization, Blockchain African Ladies and the platform Crypto Lioness. Both organizations aim to teach women about blockchain technology and cryptocurrency trading.