On June 8, the Ropsten testnet was the first one to integrate with the main network. Goerli, the subsequent and last testnet, is anticipated to arrive in roughly a month’s time.
During a livestreamed meeting of Ethereum’s core developers, when the topic of the testnet merging was being discussed, Ethereum co-founder Vitalik Buterin commented, “Happy to see another test that’s appearing to be successful so far.”

Investors, developers, and users who have been patiently waiting for the frequently postponed move to take place on Ethereum’s mainnet should take heart from the fact that the second merge between the PoS consensus layer and the application layer on testnets was successful. This is an encouraging sign. In order to enhance the decentralization of Ethereum’s nodes and cut the network’s overall energy usage by more than 99 percent, the cryptocurrency’s developers are considering making the transition from PoW to PoS this year.

Over the next several days, developers will keep a close eye on the testnet to make certain that it is operating smoothly under PoS and to iron out any possible flaws that may have been introduced. In the first few seconds following the merging, engineers saw that certain validator nodes seemed to be having difficulty switching to the new system. This led to the discovery of missing slots. Epochs, not blocks, are the unit of transaction processing in Ethereum’s Proof-of-Stake mode. Each epoch has a total of 32 slots, which are intervals of around 12 seconds during which a randomly selected validator has the opportunity to put up a proposal for a block.

The incorrect setup of the nodes in question, as stated by Danny Ryan, a researcher working for the Ethereum Foundation, was the root source of these difficulties, as he explained. A member of the Ethereum education community known as superphiz.eth referred to the Sepolia integration as a “resounding success.” The Goerli public testnet will serve as the conclusive validation environment for The Merge. Participants on today’s webcast have hypothesized that the transition from PoW to PoS for Goerli might take place over the next three to four weeks, so paving the way for Ethereum’s mainnet to perhaps join in September. 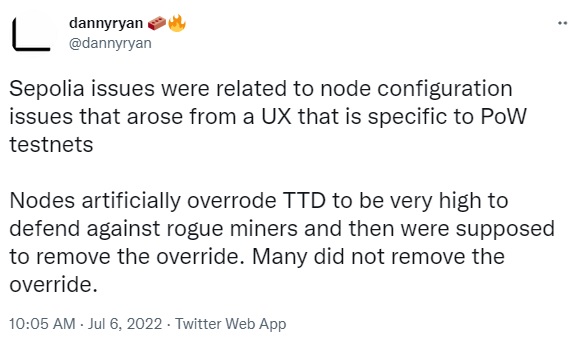 The price of Ether was not affected by today’s events and continues to trade in the same general range as other cryptocurrency markets, which is approximately $1,140. Since reaching an all-time high of $4,800 eight months ago, the value of the second most valuable cryptocurrency has decreased by 75 percent.