Snips To Launch Blockchain Based Voice Assistant With Data Protection

Snips To Launch Blockchain Based Voice Assistant With Data Protection 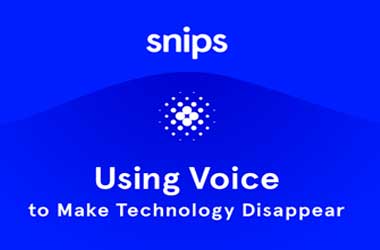 Snips, a French startup aims to compete with the likes of Siri, Alexa and Google Assistant, with the launch of a voice assistant, powered by blockchain-based artificial intelligence (AI). Notably, the product guarantees better protection of users’ personal data.

The voice assistant, named Snips AIR, will be available for clients at the end of 2019. It would be the first ever privacy-focused, decentralized voice platform.

Snips AIR will not use cloud to process data pertaining to a user and his family. Instead, the system will process all data within the device. In this manner, total data privacy is guaranteed. Snaps AIR has also claimed that its platform will resolve several issues faced by prevailing voice assistants.

Nearly 56 million smart speakers are expected to be sold this year, according to a study conducted by Canalys. Still, several privacy and security concerns exist with regards to smart speakers. A tech journalist who was provided a Google Home Mini for assessment before the release last year found out that the smart speaker was recording despite not having instructed Google Assistant to do so.

There are also concerns that smart speakers, which are connected to the internet, may be subject to hacking. It should be remembered that Google Assistant and Amazon’s Alexa can access passwords and other crucial private information.

Moreover, smart speakers are connected to the Internet which makes them prone to hackers. Amazon’s Alexa and Google Assistant can sync with a user’s calendar, and access passwords along with other private information. Snips aims to resolve the issues faced by other smart speaker providers by creating a decentralized platform using edge computing and AIR Network blockchain. The users, obviously, have full control over their personal data on a decentralized platform. The technology used by Snips enables data processing to be done within the speaker, without a need to send it to a back-end server running in cloud.

Existing voice assistants represent everything that is wrong with the Internet today: centralization of personal data, deprivation of privacy, and exploitation of users and developers. Snips AIR, which will ship in late 2019, will offer a real alternative to families who care about protecting their privacy.

Snips AIR uses a network of devices, instead of one, to create a mesh of AI assistants. Furthermore, Snips AIR processes data internally, without sending it to the cloud. The network of AIR devices communicate with each other using the shared, open source AIRnet protocol, which is made up of an abstraction layer and an ontology layer. Interestingly, any device manufacturer will be able to use the AIRnet protocol.

At the time of launch, Snips AIR will also include a number of built-in applications such as weather, home automation, multimedia, date/time, reminders, calendars, and cooking. Developers will not only be able to create apps for Snips AIR, but also publish them on a decentralized app store called the Snips Skill Store, which runs over the custom built blockchain.

Snips AIR tokens, will be used to conduct anonymous, decentralized transactions between developers and users. In addition to the product discussed above, Snips AIR platform is also working on two other AIR devices: a portable microphone, named AIR Satellite, and a smart speaker called AIR Base.

Established in 2013, Snips has over 60 employees working at its Paris and New York office. The company raised €22 million in its first round of funding and is planning to access the cryptocurrency market through an ICO in the coming months.