Binance Coin (BNB) is one of the cryptocurrencies which has been appreciating steadily over the last six months, recording an all-time peak of $46.90 on January and reflecting a gain of 189% in the aforesaid period.

The new historical high was hit a day before the routine quarterly token burning event, creating apprehensions in the mind of investors as to whether BNB will rally further upon conclusion of the token burning process.

The process results in permanent elimination of tokens from circulation, implying a decline in liquidity and results in deflation. The process is commonly adopted by several ventures in the cryptocurrency industry. The procedure does not destroy the tokens, but makes it unusable.

Other than a change in overall supply, Binance Chain had rolled out smart contract and cross-chain asset swaps features in recent times, facilitating the creation of Decentralized Finance (DeFi) applications. The stupendous profit reported by the cryptocurrency exchange is also another reason for the appreciation of BNB.

Following the roll out of Binance Futures, the exchange stated that revenue from futures platform would be a part of the quarterly token burning event. This implies that the tokens removed from circulation will mirror a percentage of earnings recorded by Binance in the most recent quarter.

Within a short period after launching futures contracts, the exchange has turned into a market leader. In the past 16 months since the roll out, the platform’s open interest has increased to $4 billion, shadowing even well-rooted derivative exchanges such as Huobi, OKEx and BitMEX.

To begin with, Binance said that it would buy the coins set aside for burning, but the plan was changed in February 2019. Currently, the token process involves cutting down the likely supply until the count reaches the objective of 100 billion.

The recent BNB burning took place on October 16, 2020 and the process involved an aggregate of 2.25 million BNB. Even though the overall supply is at 142.41 million, Messari pegs the liquidity at 108.35 million. The difference is related to the coin that remains invested or blocked for some purpose and is not available for trading.

Following the introduction of staking and validation facilities in September 2020, Binance Smart Chain quickly garnered market’s attention. The network incorporated Ethereum blockchain compatible smart contracts to the Binance chain. Soon after the roll out, a series of decentralized applications were hosted on the chain. 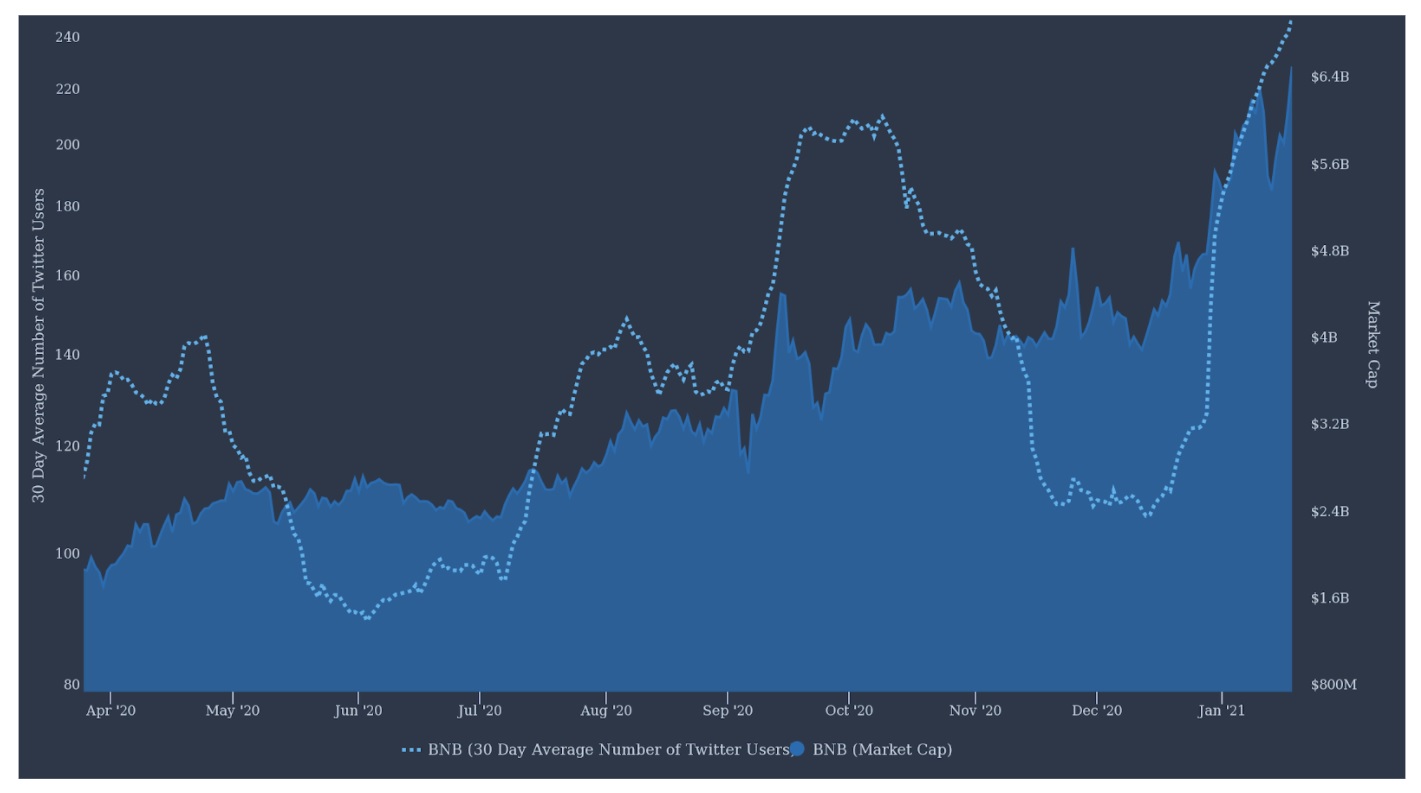 Info published by TheTie, a different kind of platform facilitating social analytics, indicates that the latest price rally was paralleled by a steep rise in Twitter interactions by crypto enthusiasts. Even though it is not a fundamental criteria, the info indicates that as much attention a token receives from social media, the easier it is to receive support from buyers.

Several investors perceive token burning as a positive development with respect to the price as the supply decreases and this encourages investors to hold on to the tokens instead of selling it in the market at every peak. Notably, the recent burn had no effect on the price of BNB. The scenario implies that the market respose is changing rapidly as per variations in price.

On the contrary, investors could have even regarded a non-circulating token burn as unimportant event. Therefore, those who are purchasing BNB with the anticipation of a post-burn rally may feel disappointed.