Bitcoin (BTC) has just finished one of the best first-quarter in eight years as the usual March decline did not happen this time. Data provided by analytics firm Bybt on the first-day of the second-quarter indicates that the BTC/USD pair has rallied more in the first three months of 2021, compared to any other year since 2013.

In spite of not reaching all-time peak before the start of second-quarter, Bitcoin has made an unusual performance in March, which is well-known for negative yield. In addition to recording gains of about 30%, the cryptocurrency also recorded its record high price of $61,700.

Overall, the first-quarter of this year has recorded only green candles on monthly time frame, mirroring a collective quarterly increase of 103.1%. The previous year to overshadow the yield was in 2013, when Bitcoin was trading below $100, posting a first-quarter performance of about 539%.

Expectation for the forthcoming few months is already rising. The second-quarter is conventionally the robust time of the year for the numero uno crypto with only two years recording weak returns of below 10%. In 2019, the crypto recorded 159% gains, reflecting the best second-quarter since 2013.

Analyzing raw yield data creates a perception that Bitcoin is trending precisely as anticipated after the block reward halving event last year, proving again that it is the strongest in every four-year halving event. 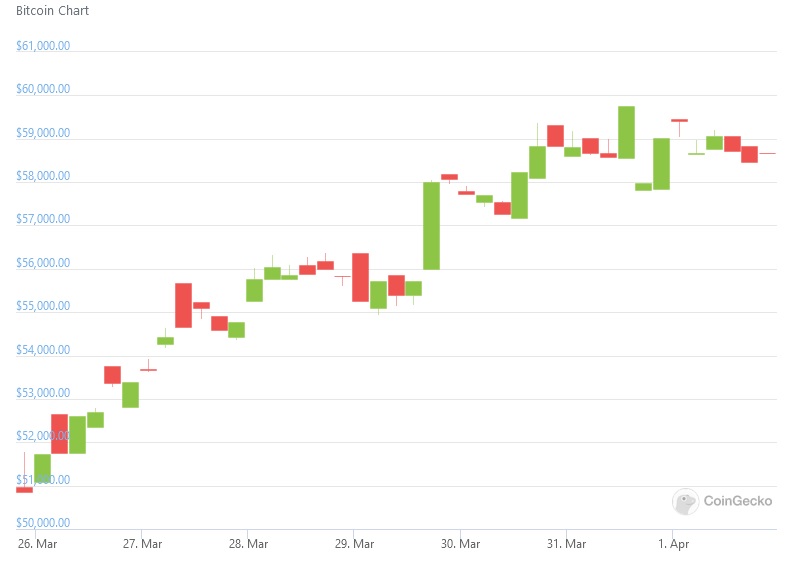 Equating this cycle to earlier ones, including 2021 to 2013 and also 2017, in the meantime indicates that irrespective of all-time peak, Bitcoin has not trended in an extraordinary manner. By posting the recent variant of a chart indicating price movements after every halving, quant analyst Plan B has laid to rest worries that BTC/USD has rallied too fast in the past few months.

#bitcoin currently in between 2013 and 2017 tracks pic.twitter.com/P8zUKzawk4

Notably, Plan B’s stock-to-flow valuation model forecasts a price of at least $100,000 or a maximum of $288,000 in the current cycle, with the minimum price now seemingly extremely conservative to be perceived as a peak price.