Last week was crucial for the conventional market and cryptos. The statements issued by the chairman of the US Fed, Jerome Powell, did not succeed in satisfying investors anticipations. This caused a decline in core markets and due to high correlation, Bitcoin also lost ground.

Some experienced analysts anticipate the decline to carry on until the end of this month. Nevertheless, the crypto has rebounded on news of fresh stimulus package from the US Senate. The package, valued at $1.90 trillion, was unveiled with an objective of negating the negative impact of Covid-19.

Trader Michaël van de Poppe has turned bullish on news of fresh stimulus package and anticipates Bitcoin’s price to surge sharply. In the near-term, the trader has advised fellow traders to stay cautious and has pinned $47,000 as a major support.

Until Bitcoin breaks above $50,000 in a firm manner, Poppe anticipates the trend to stay bearish with “market-wide weakness in the near term,” as the chart below indicates. Bitcoin’s price could decline to a low of $40,000 in case it does not gather adequate momentum. 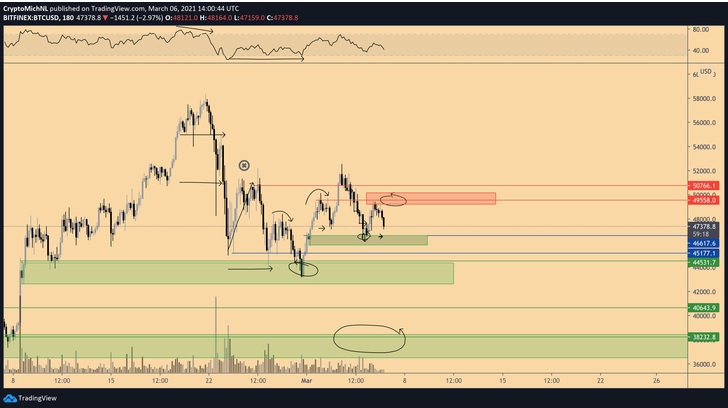 In that context, Santiment has identified a rise in bearish sentiment on Bitcoin in social media platform. As per the company, the community did not react much to Bitcoin’s price action and has remained the ‘most bearish’ since the beginning of October 2020.

Comparable documents, as per Santiment, have revealed in the past that it is always profitable to invest when the sentiment is bearish. The chart provided below indicates that in October 2020, the bearish sentiment was succeeded by a rally in the price of Bitcoin. 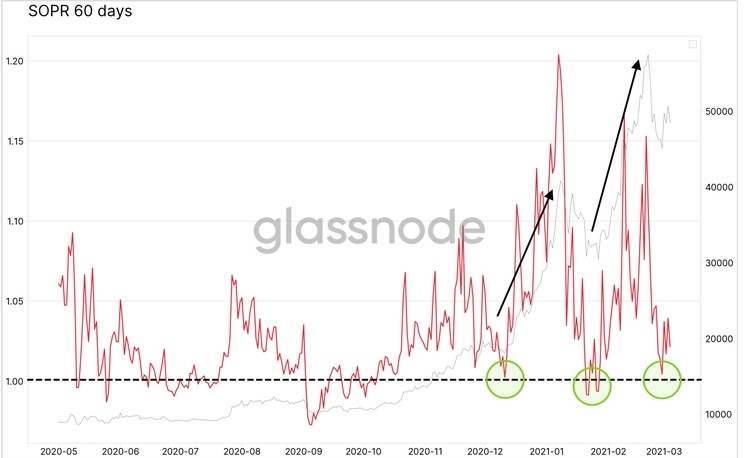 Backing the aforesaid argument, data provided by CryptoQuant shows that institutions that have bought Bitcoin since the end of last year “have not moved their BTC,” as the firm’s CEO Ki-Young Ju pointed out. The info is drawn from transaction activity on Coinbase, which is one of the preferred trading platforms of institutions for purchasing Bitcoin.

Data provided by Glassnode shows that the Spend Output Profit Ratio (SOPR) has readjusted and reflects “high conviction” in owners of Bitcoin (BTC) and amateur investors. Hence, Glassnode has stated that coins that have been purchased in recent times did not decline much during the latest market downtrend. Investors were unwilling to dilute their Bitcoin holdings at a loss.

We are in one of the most over extended, rapid Bitcoin run-ups ever.

Every time we have extended this far in the past, we have corrected much more.

1. We will correct more
2. More institutional buys / stimulus is needed, or
3. Brrr has changed the game pic.twitter.com/NduuZoTPTJ

On the basis of past performance of Bitcoin, Chrles Edwards, founder of Capriole Investments, has stated that Bitcoin’s price appreciation has turned out to be the “fastest and most extended.” Hence, he trusts the price could decline additionally or attract more institutional rewards to restart its bull run.