Bitcoin (BTC) came under selling pressure on March 15 as large investors and speculators hammered the price to below $55,000, just two days after the numero uno crypto hit an all-time peak of $61,000.

Data provided by CoinGecko.com indicates that Bitcoin’s price declined to a low of $54,500 and large buyers are yet to enter the frame to halt the decline.

A wide range of latest development have increased the FUD (fear, uncertainty and doubt) factor of the king of crypto, including unconfirmed reports of a likely cryptocurrency ban in India that would make trading, possession, mining, issuance and transfer of crypto illegal.

The gloomy sentiment got aggravated by the bad news of PancakeSwap (CAKE) and Cream Finance (CREAM), popular DeFi projects hosted on Binance Smart Chain, getting attacked in the form of DNS spoofing to prey upon users typing their private keys through the website.

Core team of both ventures quickly alerted users of the exploit and suggested them to stay away from logging in until things are sorted out. The teams also asked users to store the private keys and seed phrases offline. At the end of the day, CAKE lost 8.7%, while CREAM fell by 14.3%, before rebounding to $110 at daily close.

In spite of Monday’s fall, traders are bullish that Bitcoin will see a quick rebound and a recent poll assesses that roughly 10% of the $400 billion in pandemic relief for the US citizen could be utilized for buying Bitcoin and stocks.

The Bitcoin futures market also indicates that traders remain bullish on the prospects of continuation of the rally as open interest remains at record high level of roughly $22.50 billion.
As per Chad Steinglass, Chief of Trading at CrossTower, the sell-off was not an unexpected incident as liquidity remains less during weekends, which paves way for “liquidations in highly levered swap and options products that trade outside of the U.S.,” fueling the decline.

“Couple this with the fact that China has been trading weak ever since the Lunar New Year in both equity and crypto markets, and a sell-off from the weekend highs, while disappointing, is not particularly surprising.” 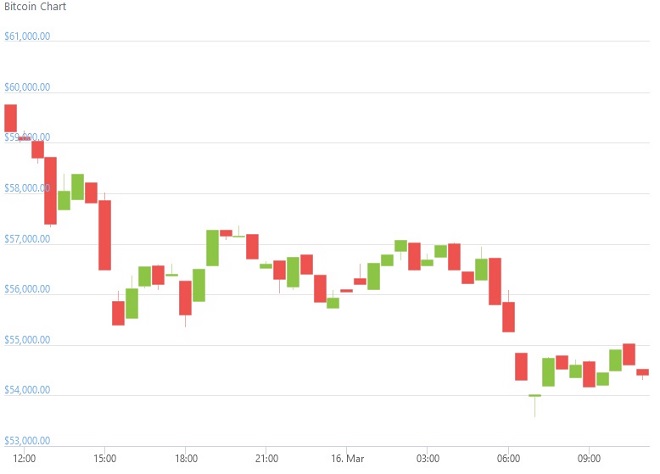