The open interest in Bitcoin futures contracts has returned to May levels, which has created confidence that the next major bullish breakout may take the cryptocurrency beyond $50,000. On Monday, the aggregate count of open futures contracts on the Deribit market hit $1.37 billion, the peak since May 27.

In the meantime, the spread between Bitcoin’s spot price and its futures contract price increased, pushing its three-month base (annualized) once again to June levels, according to Stack Funds data. The rebound, according to the investment management company, is an indication of traders rejoining the Bitcoin market with a “riskier attitude.”

As per its director of research, Lennard Neo, Bitcoin futures “contango trading” indicated that “investors’ views remain tilted towards bullishness. More significantly, we have seen continuous resilience in bid momentum against offers, prompting us to think that marketplaces will be well-supported at least in the short future, with additional stabilization before breaching $50,000,” he said in a presentation.

Bitcoin futures fell under the pressure of a violent sell-off on the world’s biggest cryptocurrency spot market in June. The drop from $41,322 to $28,800 eliminated the basis trade, which involves buying Bitcoin in the spot market and sell post-dated futures contracts to secure the difference between the two values.

Leveraged futures traders, it seemed, made an exit from their long positions to satisfy margin calls — that is, through exchange-based automated liquidation procedures. This narrowed the spread between Bitcoin futures and spot prices, increasing concerns about a negative premium on futures contracts, commonly known as backwardation. Deribit’s three-month (annualized) rate was approximately 2.5%. However, under ideal “contango” conditions, futures should trade at a 5–1% yearly premium over the stablecoin lending rate.

Particularly, the June decline was caused by miners’ surrender rather than protracted liquidation. It highlighted China’s clampdown on regional crypto companies when Bitcoin values plummeted, saying that the move caused crypto miners to suddenly cease operations and, as a result, liquidate their Bitcoin holdings in bulk to make up for the losses. 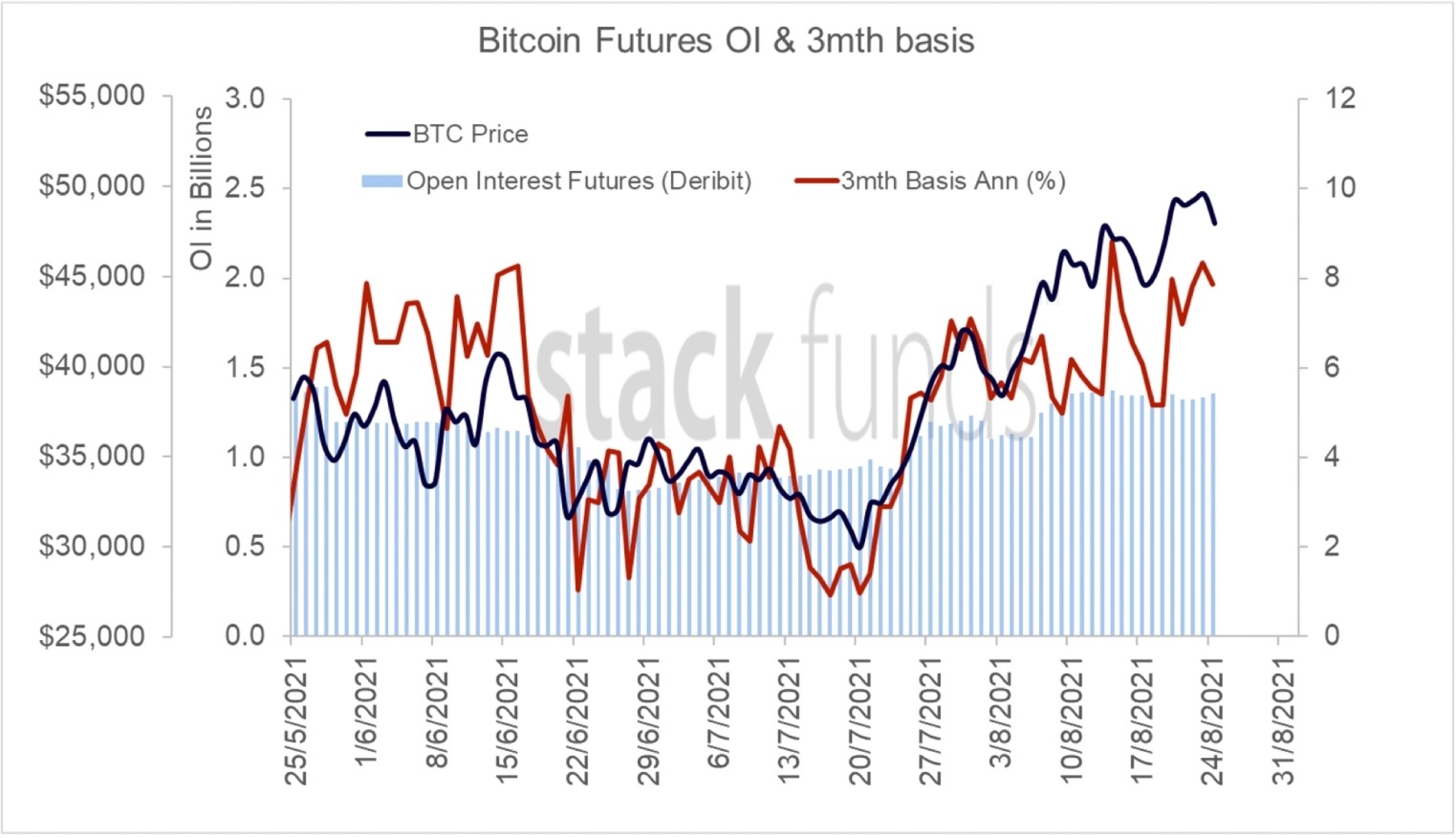 As August approaches, Bitcoin has brushed away the majority of mining worries, with a latest Glassnode report suggesting that miners have begun amassing tokens. In the meantime, consistently rising inflation reports in the US have bolstered Bitcoin’s safe-haven story among large investors. 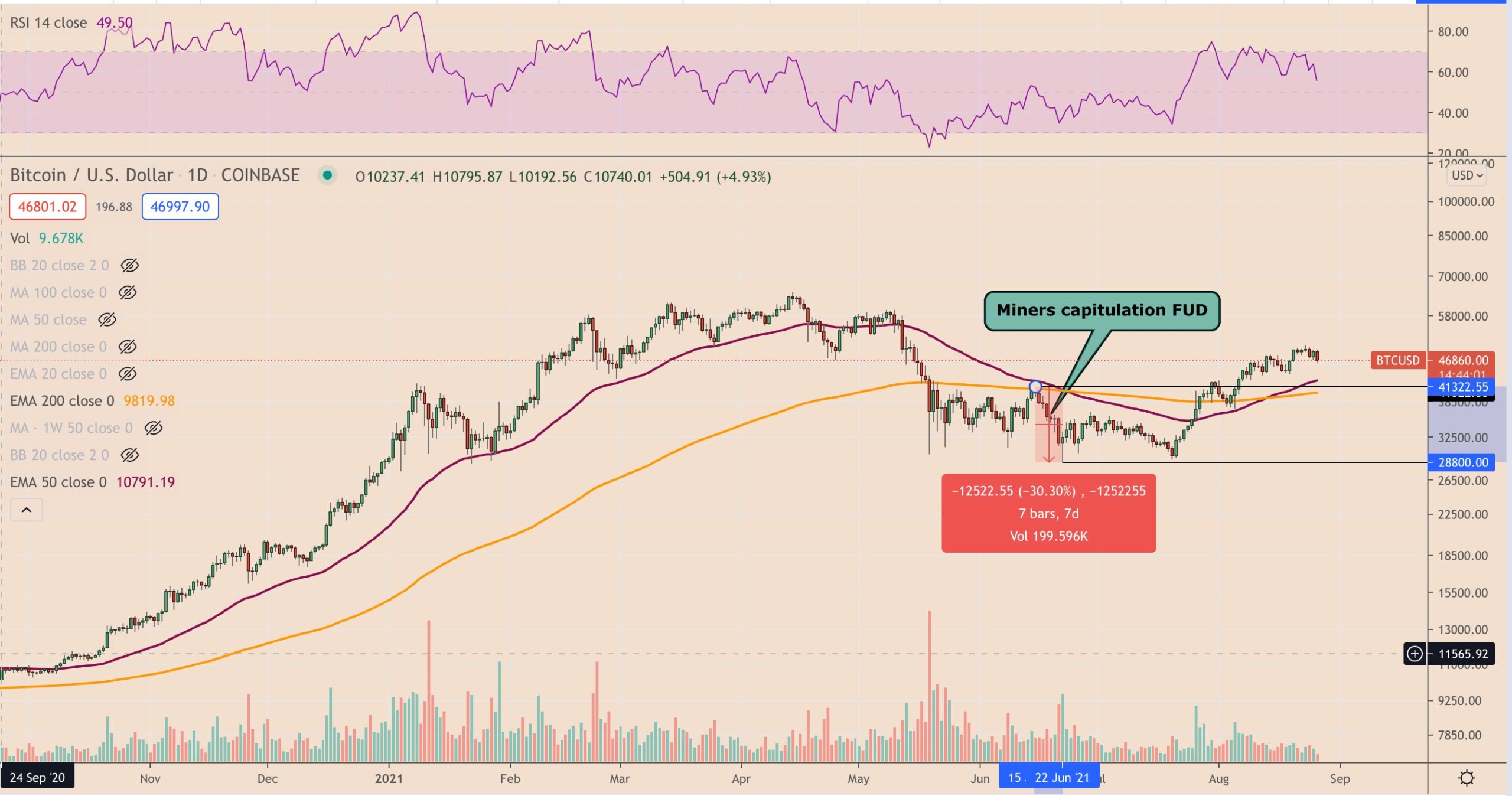 That partly explains why Bitcoin fell to around $29,000 before rising to $50,000 in less than a month. It also highlights the increase in futures open interest and basis trading, indicating increased purchasing activity among both investors and traders. However, Neo saw a possible flaw. The analyst emphasized Bitcoin’s latest inability to finish above its psychological barrier of $50,000, adding that it may stymie the currency’s impending rise.

“The fact that the 3-month basis has not broken through June levels and is still far below April levels indicates that actual demand and speculation stay conservative,” he said. Bitcoin was trading at $46,745, down 1.9% in the past 24 hours.