On Oct. 1, Bitcoin (BTC) is aiming to recapture $50,000 after the US dollar fell from a one-year high. Given Bitcoin’s recent negative correlation with the greenback, a weaker dollar may help drive the price of BTC further higher in the near future.

US Dollar Index (DXY), a currency strength index that comprises a bouquet of six major currencies such as the euro and pound sterling, rose to 94.50 points on Thursday, its highest level since September 28, 2020. On the other hand, news of increasing US unemployment claims, contrary to expectations, caused it to recede.

The reason could be that the market may be expecting the Federal Reserve to postpone its tapering of the $120-billion asset-purchasing program from November to a future date. Such a scenario will bebe good news for the markets, with the dollar head further lower.While writing this article, the index was trading at $94.263.

The dollar’s technicals also pointed to a possible pullback in the near future. An excellent illustration is the dollar index, which according to unaffiliated market analyst TradingShot is likely to peak out and begin a drop in the forthcoming sessions.

Tradingshot.com said that DXY seemed to be near the top of its formation on August 15th based on a one-day relative strength index (RSI). As a result, DXY is preparing a powerful comeback to the Megaphone’s base. And in the meantime, the Bitcoin market recently painted a falling wedge shape as a result of a wave of selling.

Falling wedges occur when the price declines inside a channel formed by two divergent, descending trendlines. According to conventional wisdom, the falling wedge pattern is a bullish reversal sign because it pushes the market upward by as much as the greatest distance between its trendlines when it breaks above its top trendline. The highest heigh of the pattern is around $10,000. This means that if the wedge breakthrough occurs as expected, Bitcoin’s price may at least retest $50,000. 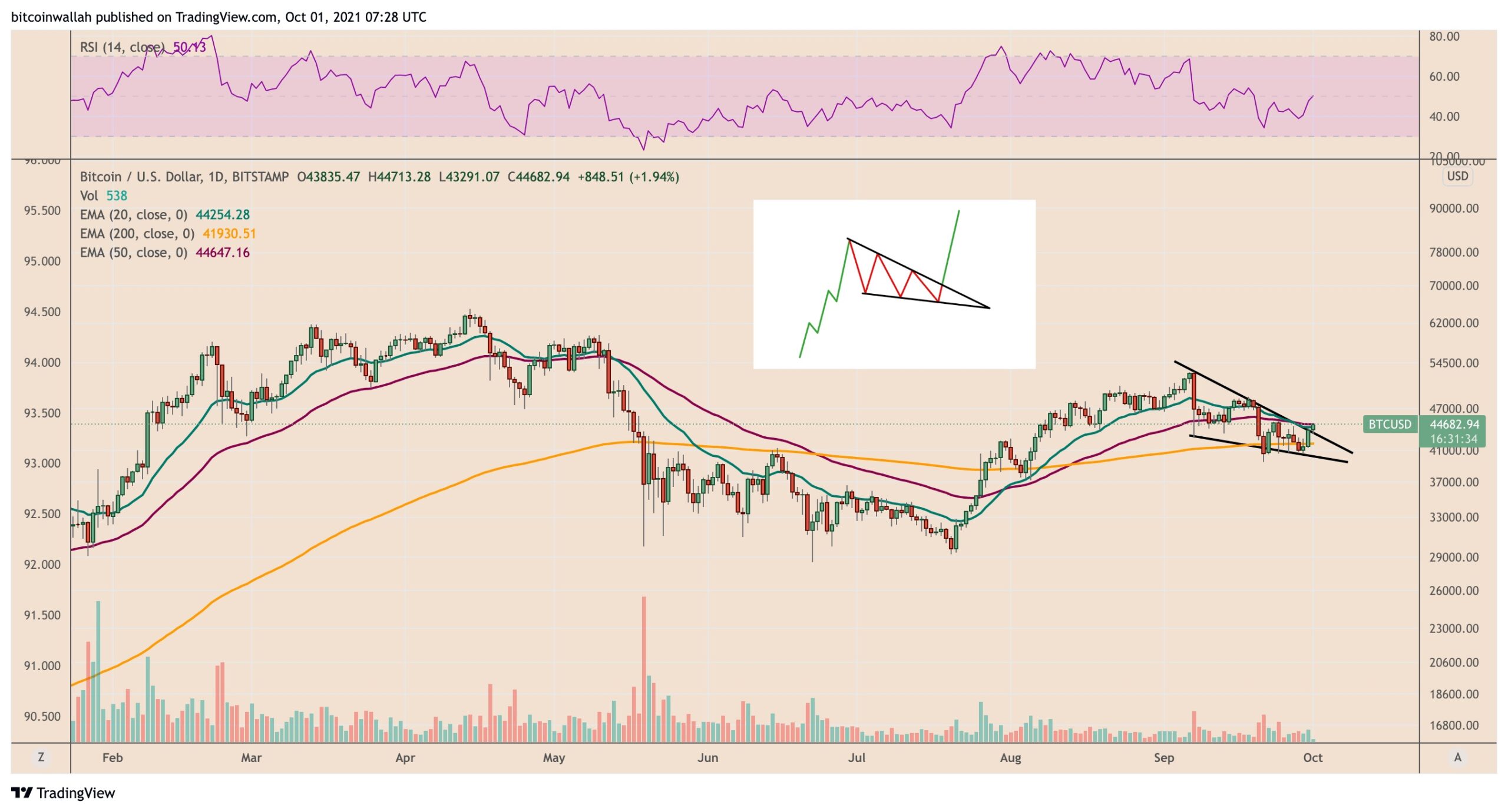 Investors’ short-term demand for bitcoin may be boosted if the disappointing employment data comes out well. Investors’ surplus capital will continue to flow into cryptocurrency markets due to dollar weakness and devaluation versus increasing inflation, according to Vasja Zupan, president of Matrix Exchange.

A consistently rising inflation rate in the United States would only drive Bitcoin’s price higher in the long run, according to him. As a result, the dollar’s value will remain lower than Bitcoin’s over the long run.