Since the final week of May, the amount of Bitcoins retained on centralized exchanges has undergone a steady decline, with about 2,000 BTC (worth roughly $66 million at current rates) leaving each day.

According to Glassnode’s July 12 Week On-Chain data, Bitcoin balances on centralized exchanges have dropped to quantities not witnessed since April, when BTC hit an all-time peak of over $65,000.

The continuous drain of exchange coin stockpiles was a significant motif during the bull market events that led up to this high, according to the experts.

According to Glassnode, a major portion of this BTC was sent to the Grayscale GBTC Trust or stockpiled by institutions, resulting in a “continuous net drain from cryptocurrency exchanges.”

When Bitcoin prices fell in May, nevertheless, the pattern inverted, with coins being delivered to exchanges for sale. As outflows rise, the net transfer quantity has gone back into negative zone. “On a 14-day moving average perspective, the previous two weeks have witnessed a more favorable return to cryptocurrency exchange outflows, at a level of around 2k BTC each day.”

After another peak of about 17% in May, the percentage of on-chain transaction costs reflected by exchange deposits fell to 14% dominance this week, according to the study. Withdrawal on-chain costs jumped from 3.7% to 5.4% this month, indicating a growing preference for stockpiling over sales, according to the report. 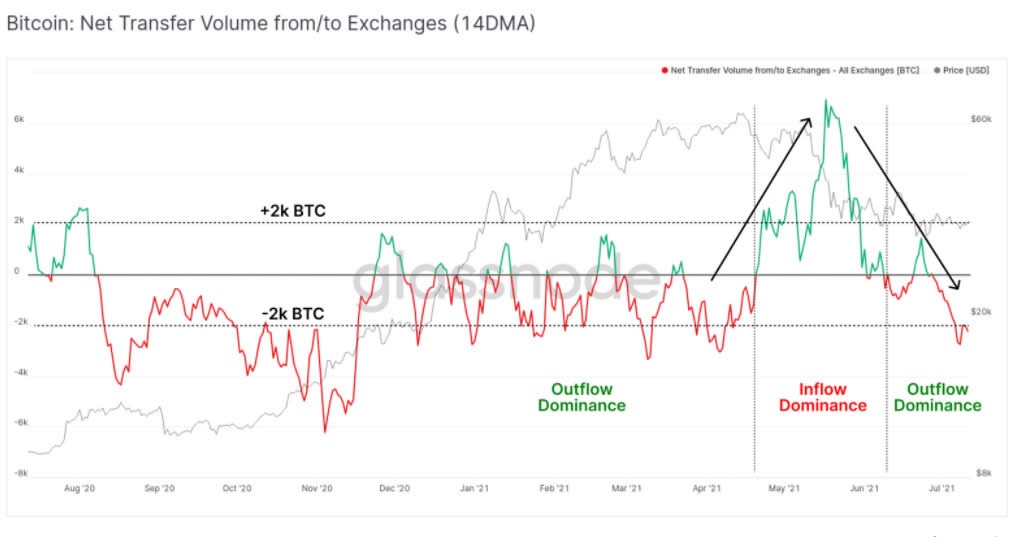 Over the last two weeks, the drop in exchange reserves seems to have corresponded with an increase in capital flows to decentralized finance models.