For the first time ever, Bitcoin (BTC) breached $50,000 level in popular futures exchanges, including Binance futures. Nevertheless, spot market continues to put up tough resistance near that level, with Bitcoin finding it tough to stay above $49,000.

Earlier today, Bitcoin hit a level of $49,556 on Coinbase, underlining its second attempt in breaching the psychological $50,000 resistance level. Soon after recording $49,556, Bitcoin recorded a sharp retracement, dropping by roughly 3.5% within a matter of few hours.

Ki Young Ju, CEO of CryptoQuant, detailed that the difficulty faced by Bitcoin to surpass $50,000 is an outcome of battle between Coinbase whales (USD) and Stablecoin whales (USDT).

Ki pointed that a negative premium prevailed in Coinbase platform when Bitcoin failed to breach $50,000. He opined that Bitcoin can comfortably break above $50,000 only after the negative premium cools down.

Following the initial failure to breach $50,000 level, a stabilization of Coinbase premium was seen, attaining parity with Tether price in Binance platform. Coinbase basically has a greater Bitcoin price compared with Tether for most of the time, but a recovery to neutral premium, from negative, has happened in recent times.

With the rebound in Coinbase premium, crypto investor and quant trader Lex Moskovski stated that the US session could fuel the next uptrend of Bitcoin.

Ideally, the Coinbase premium is expected during the US trading session as traders in that region would be active at that time. Therefore, in case the market trades at a premium during the US session, the likelihood for extension of a Bitcoin rally would rise. Moskovski stated:

This run up to $50k keeps being dominated by buying pressure from Binance and others as opposed to Coinbase.

This is indicated by a decreasing Coinbase premium.

However, this may also mean that Coinbase buyers join the race when the U.S. wakes up.

Additionally, well-known pseudonymous crypto trader Mac stated that Bitcoin will probably break above $50,000 and create a fresh support zone. The trader stated that a likely situation would be Bitcoin rallying over $50,000, retracing to $42,000 and forming a fresh support level. He stated: 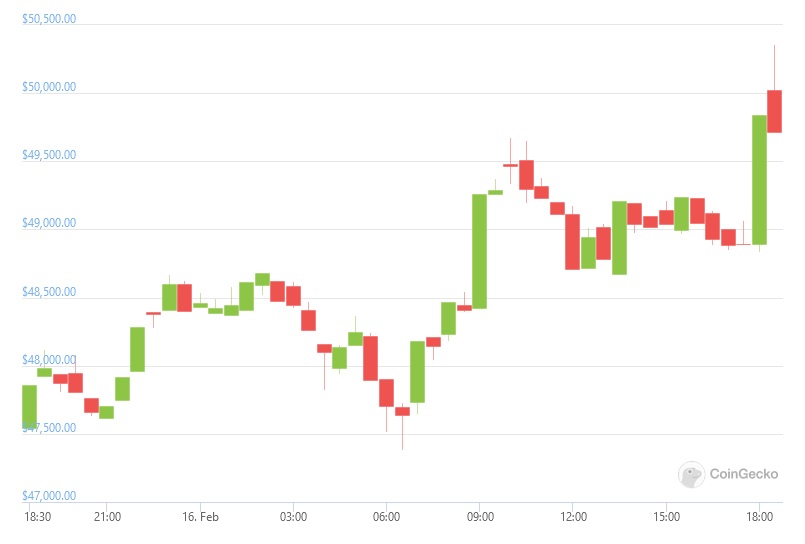 In general, traders and also on-chain analysts are expecting Bitcoin to break above $50,000 in the short-term. Nevertheless, with the financing rate pointing to an congested futures market, traders anticipate Bitcoin to undergo a price correction soon after hitting $52,000.

If the situation develops as anticipated, it would be similar to how the price of Bitcoin moved when it initially touched $42,000. The numero uno currency underwent a steep price correction to about $29,000 before the price took a U-turn to hit fresh all-time high.

Institutions are Moving Away from Bitcoin to Ethereum