Cryptocurrency market is witnessing record volumes as Bitcoin nears halving event. Specifically, April 30 saw the second biggest single day volume as per a report released by CryptoCompare, which is a market data aggregator.

In Chicago Mercantile Exchange (CME), BTC options volume hit a new record in the past few days, with 202 contracts being traded on May 5.

Cryptocurrencies worth $66.20 billion was traded on April 30 as Bitcoin (BTC) broke above $9,000, with daily trading volume reaching the second highest level after the $75.90 billion worth cryptocurrencies traded on March 13 when the market underwent a sharp price correction.

CryptoCompare assesses that 73% of trading happened on what is referred to as low-tier exchanges, while $17.90 billion worth transactions took place on top tier platforms.

The supremacy of Tether (USDT) over the markets is continuing to increase, with USDT based pairs reflecting 74% of all trade between Bitcoin and fiat currencies or stablecoins.

The document points out that Binance was the only cryptocurrency exchange to record growth in derivatives volume in April, following an unexpected rise in volume in March. 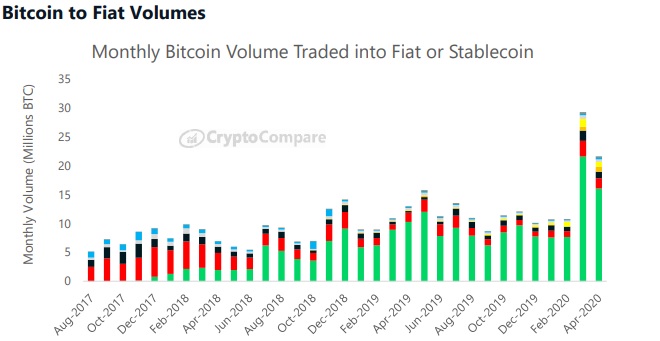 Huobi and OKEx took top spots on the basis of volume in April by facilitating trades worth $133 billion and $113 billion, respectively, in spite of contraction in monthly trade volume by 10.5% and 31.4%, respectively.

May20 10k and 11.5k calls traded in 100 lots, equivalent to 500 bitcoin options each pic.twitter.com/zBgTgTVWDe

In comparison to March, overall derivatives volume declined 25% to hit $456 billion. The percentage of aggregate cryptocurrency transactions also decreased from 30% to 27%.