Following many days of sluggish trading, Bitcoin (BTC) surged to one-week highs on Nov. 2, resulting in a short but significant breakthrough. Data from Coingecko were collected in the wake of the rapid volatility in the bitcoin/dollar exchange rate, which gained more than $1,500 in minutes.

While writing this article, $63,400 was the main centre of attention, as the pair reached its best levels since October 25. The move was expected by prominent analyst Filbfilb and others, with chart signs indicating volatility on Monday, according to the popular expert.

“Another bit of a nothing day for bitcoin… still struggling around the MR line… next touch on resistance will be a 4th touch of the downtrend so a retest and breakout fits with what I’m looking for,” he wrote in a Telegram message to subscribers of his channel, which also included an annotated chart of the cryptocurrency. “We haven’t lost the MR line or encountered resistance there, but I anticipate the next move to take place within the next 48 hours,” says the analyst.

Others have pointed out that Bitcoin’s relative strength index (RSI) is already over 70, which is a typical “prelude” to an upcoming lengthy rally in the cryptocurrency. Notably, the RSI levels are being closely monitored in order to predict when a breakout will occur as well as when the best time to leave the market would be. 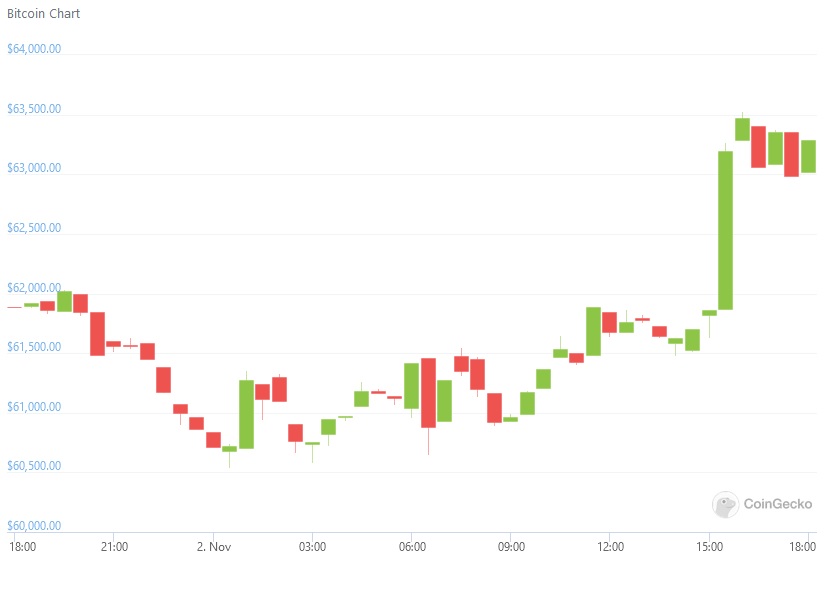 As the month of November gets underway, bullish trends have been building throughout the Bitcoin ecosystem. The most recent data reveals that, in addition to on-chain indicators being positive, investing behaviours are resembling those of February, when the cryptocurrency reached prior all-time highs of $64,900.

In particular, investors acquired more bitcoins in October than were created by miners, marking the first time this has happened since the second month of the year. Only the China crisis in May caused a break in the upward trend in 2021, with miners themselves becoming accumulators during this period.

#Bitcoin ready to break out? pic.twitter.com/EHQnwyke7D