Bitcoin rallied by more than 10% yesterday to reach $7,400 levels. The strong uptrend caught several short sellers off guard, resulting in liquidation of $180 million worth short positions in one hour .

A series of good news, including the appointment of crypto friendly David Solomon as CEO of Goldman Sachs, is believed to be the reason for the rise. Notably, Bitcoin continues to hold on to $7,300 levels, indicating a possible consolidation.

At about 6 PM London time yesterday, Bitcoin’s dollar trading volumes started surging. Within an hour the volumes reached their highest level for the month so far.

At 6.40 PM, approximately $55 million worth Bitcoin was traded within five minutes. The trading volume in US dollars fell to about $40 million at 6.45 PM.

A sudden rise in trading volumes does not necessarily mean an inflow of money into an asset. However, trading volumes did not rise sharply in other cryptocurrencies. In case of Bitcon, the recorded high of $400 million is significantly higher than its usual highs of about $150 million. Furthermore, the USD trading pair considerably gained against other Bitcoin trading pairs when the spike happened. The chart below shows the dollar pair (blue circle) has reached 50% of all other Bitcoin trading pairs.

The surge did not happen on Tether, in particular. This indicates that it might be due to fresh inflow of funds into the cryptocurrency.

Another reason for the rally may be due to a forced dilution of positions that happened on cryptocurrency exchange BitMEX, which allows traders to open highly leveraged positions on several cryptocurrencies. According to OTC trading firm and liquidity provider Cumberland, “roughly $180,000,000 were liquidated on BitMEX during the 20+ minute period between BTC’s initial spike and when it topped off.” The firm also pointed out that six of those diluted positions were worth $10 million each. 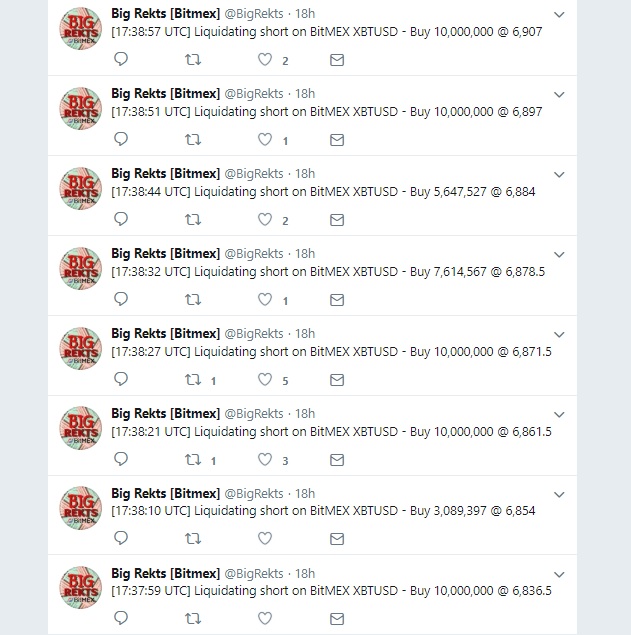 “Markets have been reacting to a number of positive pieces of news, mostly circling around big names such as BlackRock. With any indication of institutional interest in this space comes positive price action, even if it’s unclear in nature. The market just eats it up.”

Rabaglia further stated that Financial Stability Board (FSB) report on the job done by regulators across the world so far on cryptos revealed that regulators may “force banks to meet new capital requirements for their holdings of bitcoin and other crypto-assets.”

Furthermore, Rabaglia pointed out that FSB does not feel cryptos as a threat to the financial system. Notably, the views are similar to that of South Korea’s central bank, which had stated that crypto market is considerably small compared to other financial markets.

There will be at most 21 million bitcoins in existence. There isn't even enough BTC to go around for EVERY millionaire to own one. So before you buy any other coin (LTC included), try to own at least 1 BTC first. ?

Once you have 1 BTC, buy all the shitcoins you want! ? pic.twitter.com/bc3xKKGB0m