A report published by Bloomberg gives a glimpse of senior markets editor John Authers’ opinion on the rise of Bitcoin as an asset to hedge inflation. The report studies the manner in which Bitcoin’s rise has affected the prospects of gold. To assess the “true” value of Bitcoin, Authers suggests drawing it from the hypothetical absence and the prevailing economic context.

In the past, people have made use of gold as an investment vehicle for personal safeguard when there is a great risk of inflation. The author writes:

“Treasuries beat gold when people aren’t too worried about inflation, while gold wins when there are inflationary concerns. Except at present, both are falling.”

The price of yellow metal, as the chart below indicates, in comparison to silver has declined in the past year. The time of panic is quite extraordinary. From 1980 onwards, gold has risen in value inside this circle. Even the price rally happened at a time of “panic” when historically, the contrary should be right.

As per a study by Dhaval Joshi of BCA Research, pointed by the author, demand for the precious metal has been on the rise when people look for an “anti-fiat” investment vehicle, when optimism about governments or in the purchasing power of a currency in the long-haul is no longer there – fundamentally, everything that has taken place since the outbreak of Covid-19 pandemic. To detail why gold has not risen in value, Authers stated:

“(…) bitcoin has risen as an alternative anti-fiat asset. It has been popular because of the libertarian anti-government ideas that have accompanied the digital currency since its inception. Bitcoin’s increase in scale to become better known and much easier to obtain now makes it a much more viable competitor for the shiny metal.”

As manifestation of this, the author has provided the following graph. This indicates the drop in gold’s aggregate flow against the rising flows into Bitcoin. 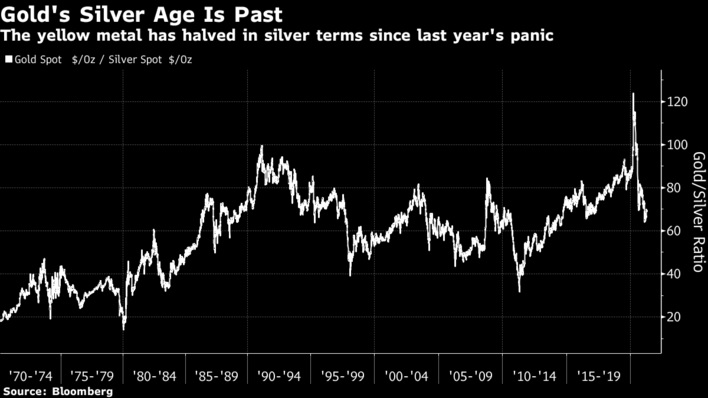 It is happening as investors choose to set aside capital for Bitcoin and other derivatives based on cryptos, or investment vehicles that offer a straightforward or indirect exposure to Bitcoin. Institutions have placed the largest bet on cryptos. At the minimum, the drop in Google searches for “Buy Bitcoin” seems to indicate. Authers further states:

“Bitcoin’s performance over the last year is directly aligned with movements in bond yields. When yields rise, so does bitcoin. This implies that the digital currency benefits directly from the “reflation trade” — or the belief that inflation is coming.” 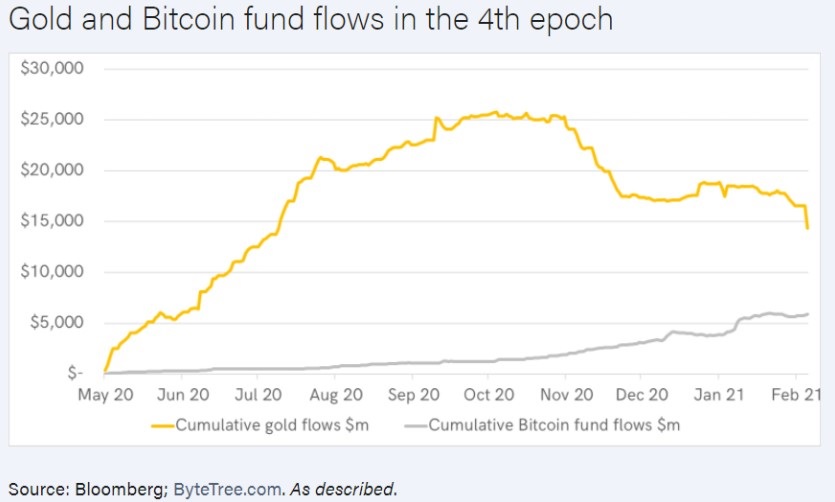 Finally, Authers identifies a correlation i.e. negative for gold and positive for Bitcoin, sparked by worries of increasing inflationary pressure. In such circumstances, the precious metal is seen as the “weaker” anti-inflation asset in comparison to Bitcoin. Simultaneously, the author detects a link between the prevailing stasis in Bitcoin and the halt in the bond market. Similar to cryptos, 10-year Treasury bonds have been moving sideways for the past 30 days.