As Bitcoin continues to hover around all-time high of about $42,000 traded in January, a huge number of first time crypto enthusiasts continue to throng the platform.

Specifically, as institutional adoption of Bitcoin grows in the US, almost all cryptocurrency exchanges serving the US clients, including Kraken, Gemini and Binance.US, have become a portion of the top 10,000 international sites.

Even though Binance surpasses Coinbase by a thin margin in terms of global visitors, Coinbase continues to lead in the US, with 386th rank among the US internet users.

The data is based on December 2020 survey, with the cryptocurrency frenzy at the beginning of this year probably increasing the popularity of cryptocurrency exchanges to new highs.

In spite of issues such as system outages and many more technical issues, which cryptocurrency trading platforms have been facing for several years, its popularity remains unchanged.

Currently, Coinbase app tops the crypto focused finance application on Apple App Store. Notably, Binance.US and Binance app is also in the top ten. Interestingly, despite hogging the limelight for wrong reasons, Robinhood recorded a surge in app downloads in the past few days as clients and market watchers accused the company of deliberately blocking trades in some counters such as GameStop by siding with institutions.

Coinbase, which is generally opted for large ticket purchases of cryptocurrencies, has transformed into a bellwether for validating market’s eagerness to add up or dilute positions. Earlier this week, large outflows of cryptos took place from Coinbase to private wallets.

According to analysts, the scenario reflects long-term commitment from institutions, and also underlines sustained purchases irrespective of short-term price fluctuations. 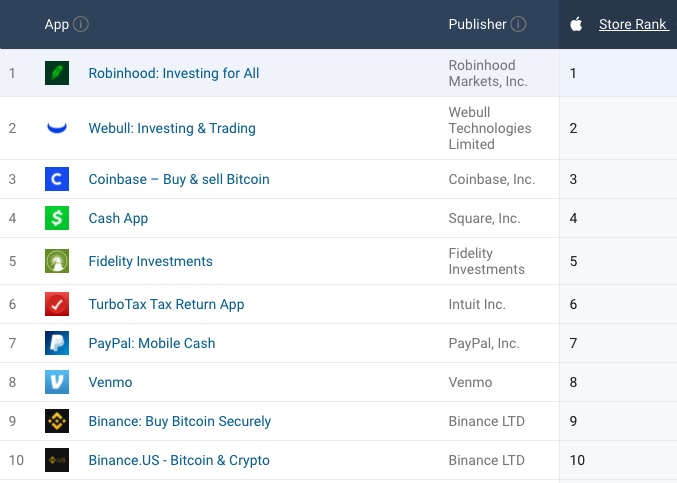 The strongest bullish signal is working.

32.4k was the bottom and $BTC price surged +13%. But as I said, institutional buying is the strongest bullish signal overriding all other bearish signals.

I expect it will go up more.