Over the last few weeks, Bitcoin (BTC) has been trading in a narrow range and trading volume has been fairly steady. In the meantime, numerous tokens on the Ethereum network have been making new highs, specifically the Decentralized Finance (DeFi) tokens.

Latest info from Messari indicates that Ethereum has eclipsed Bitcoin in terms of the value of aggregate transactions processed per day.

This implies that the dollar value of Ether (ETH) and other tokens hosted on its blockchain is now greater than the value of daily Bitcoin transactions.

Most of the volume was generated due to transactions related to Tether (USDT) and as per Messari, it could likely exceed Bitcoin as the most traded crypto in the market.

Bitcoin blockchain also hosts colored cryptos via covenants such as Counterparty and Omini, but they are insignificant in comparison to the smart contract hosting and handling ability of Ethereum network, which continues to lead the blockchain sector with unique possibilities such as DeFi.

Along with lower charges and quicker transaction ability, Ethereum has turned out to be the preferred blockchain for both centralized and decentralized stablecoins. 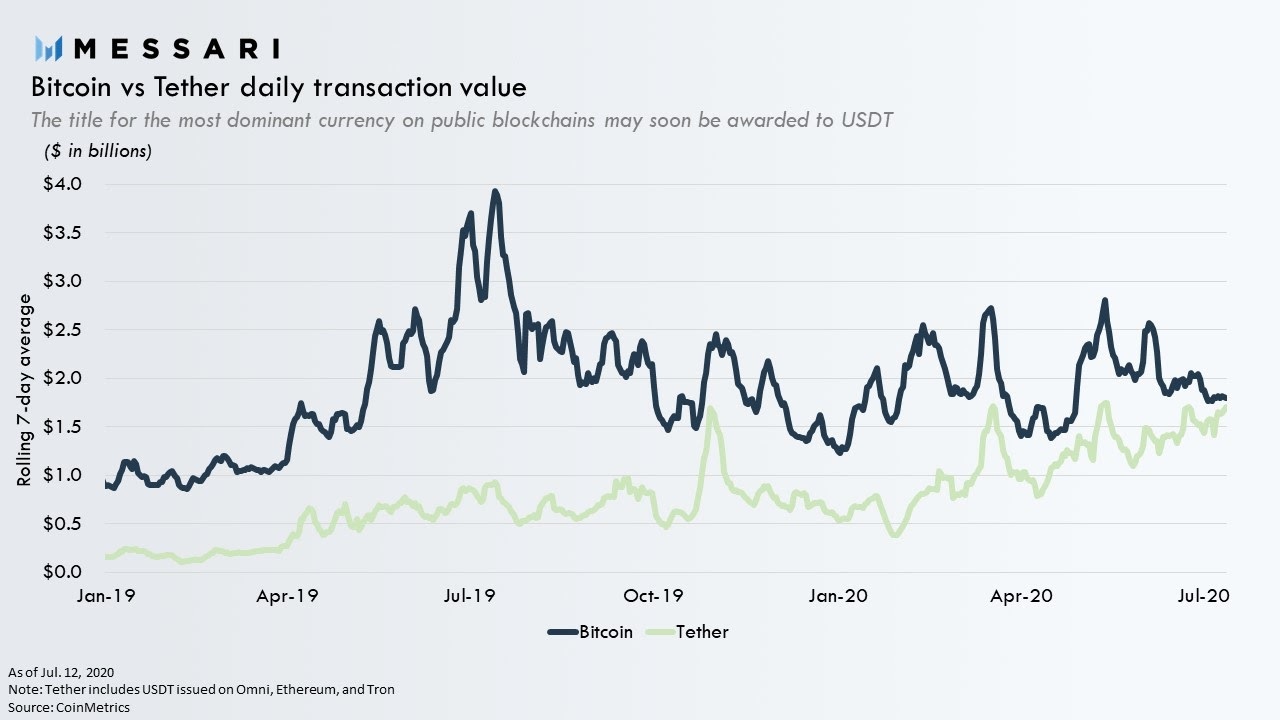 Even though USDT was initially issued on the Bitcoin blockchain, a mere 13.2% of total liquidity remains on it, while Ethereum blockchain holds 59.8% of the USDT supply. As a major portion of the USDT liquidity remains on Ethereum blockchain, USDT also uses maximum gas in the network, as per data provided by ETH Gas Station.

The market cap of stablecoins rose from $2.40 billion to $8 billion in the first quarter, mainly due to USDT. In the second-quarter, the market cap increased by another $3.80 billion, taking the aggregate market cap to more than $12 billion, with $9.18 billion contributed by Tether only. The stablecoin has also eclipsed Ripple (XRP) as the third largest crypto.

Even though stablecoin is often used for inter exchange dealings, DeFi has also contributed significantly to the transactions on the Ethereum network.

Stablecoins which are pegged to fiat currencies are prominently used by DeFi lending covenants which have been gaining popularity since the beginning of this year.

The second quarter saw roughly $2 billion getting locked in DeFi platforms. Compound itself attained a key landmark with more than $1 billion assets overall.

Stablecoins and DeFi sector are expected to increase transaction volume and value further on the Ethereum network but crypto enthusiasts are worried about the ability of the blockchain to handle burgeoning transaction volumes.

Stablecoins generally represent over 70% of total value of transactions settled on the Ethereum network. The network continues to face unaddressed congestion and scaling issues and that may cause serious challenges in DeFi platforms.

Currently, there is not clarity as to whether the Ethereum Network will be able to manage the swifty growing stablecoin and DeFi operations, specifically as corporations start looking the amble opportunities in the domain.