Bitcoin (BTC) hit a new yearly high of $19.240 yesterday. Precisely quoting the all-time high is a bit difficult task as prices traded in the spot market varies considerably. For illustration, Coinbase quotes $19,892 as Bitcoin’s high, while BitMEX and Binance calls $19,891 and $19,799, respectively, as the peak.

Therefore, most traders regard $20,000 as the crucial level which needs to be breached for calling a new all-time high.

Breaking above $19,000 level happened faster than many crypto enthusiasts anticipated, specifically after Bitcoin price plunged to $18,000 in the evening session on November 23. The decline was roughly in parallel with XRP’s 30% decline at Coinbase after the altcoin spiked to $0.92.

Data provided by TheTie, a webpage offering info via social analytics, indicated a slump in trading sentiment as Bitcoin price lost steam on November 22 and 23 as traders expected a likely retest of minor support levels below $18,000.

According to Joshua Frank, the founder at TheTIE:

This indicates that irrespective of strong retracements, for example $18,000 or lower, a major portion of retail investors or those who are closely watching price movements of Bitcoin will hold a bullish view of the cryptocurrency on the basis of past price movement and sentiment information.

Data pertaining to Google Trends indicate that searches for the phrase ‘Bitcoin’ also hit a 2020 high on November 24 as the price breached $19,000, but the not near the peak recorded in December 2017.

As indicated by the 4-hour chart, Bitcoin’s reversal to $18,000 established a double bottom patter precisely at the main support, and bulls came in to purchase the decline volume bar recording three consecutive spikes.

At the time of writing this article, the price of Bitcoin has already retraced to re-test the support level of $18,900 and if this support gets broken then the next buying support is anticipated near $18,650, a level just above the 20-day moving average.

Market analysts expect another round of consolidation before beginning a fresh rally, as seen in the past rally that took Bitcoin over $18,000.

According to Matt Blom, the head of global sales trading at EQUOS:

“Bitcoin is focusing on claiming a new all-time high and it seems highly unlikely that having come this close, it fails to break the 2017 record. With a dearth of resistance levels overhead, thoughts turn to the next key upside target. Using Fibonnaci retracements levels, we see $29,100 as the goal, with a 1.618 move from $4,644 to $19,447 price points as our basis.” 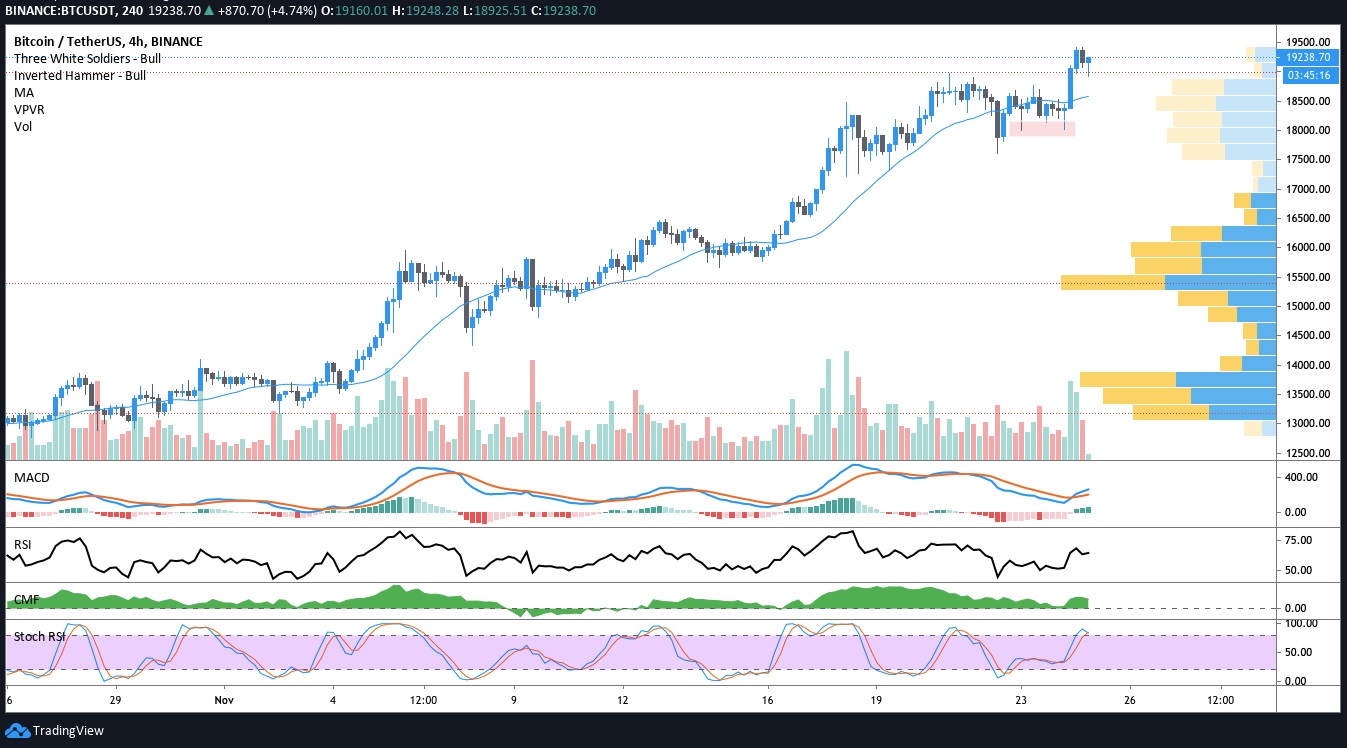