Energy consumption for the mining of a single bitcoin is estimated to be 1,449 kilowatt hours (kWh). This is equivalent to the energy used by a typical American home for around 13 years. Bitcoin mining is regarded as a pricey endeavor due to the significant energy expenditure required. However, specific pricing might change significantly based on the region as well as the price of power in that particular area.

Where can one mine this widely used cryptocurrency for the least amount of money, and where does it cost the most? This chart, created by 911 Metallurgist, shows the expected global cost of bitcoin mining as of March 23, 2022, based on current prices and average expenses. It’s important to lay out the fundamentals of bitcoin mining and why it eats up so much power before getting started.

Bitcoin mining is the process of adding and confirming a transaction to the blockchain, the distributed database that records all Bitcoin transactions and is used to validate their legitimacy. Crypto miners must solve a difficult equation created by the blockchain network in order to set a key metric.

At any one moment, there might be tens of thousands of miners vying to decipher the same code. The only person who will get a reward for solving the equation is the first person to do so (unless you are a member of a mining pool, which is effectively a group of miners who agree to combine their efforts in order to maximize their odds of solving the equation). If you want to increase your odds of winning, you need to solve the problem quickly, which necessitates using equipment that consumes a lot of electricity.

On July 15, 2022, the value of one bitcoin was $20,863.69, but the average cost to mine bitcoin was $35,404.03 across all 198 nations that were included in the dataset. This means that bitcoin mining was more expensive than its worth at the time. However, it is essential to keep in mind that the required amount of energy and the final cost are subject to continuous change due to the varying pricing of electricity as well as the number of miners participating in the Bitcoin network. A summary of the expenses and possible earnings from mining one bitcoin in each nation as of March 23, 2022 is provided below. 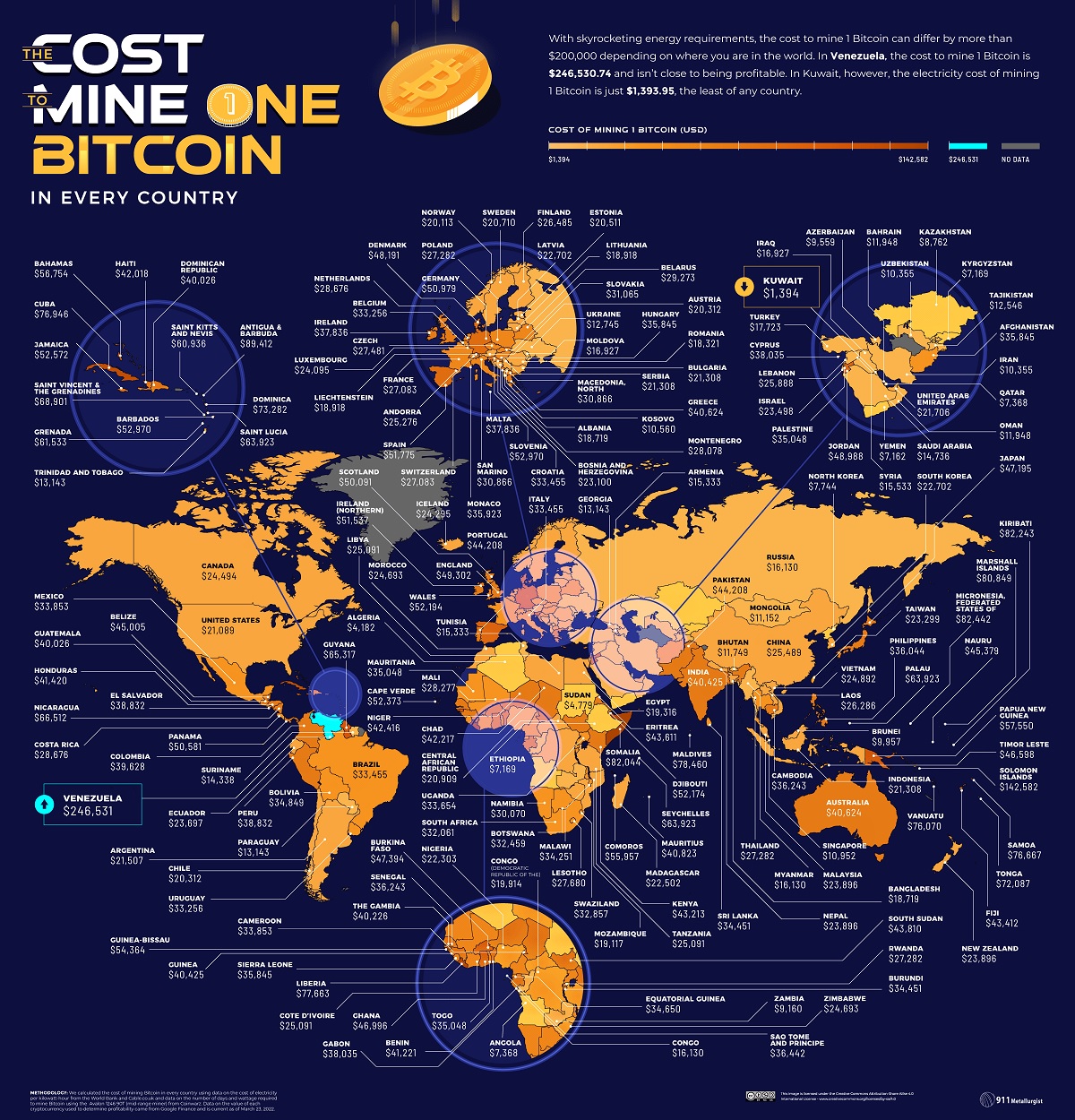 In terms of overall cost, Bitcoin mining in Venezuela is the most costly in the world. The price of mining a single bitcoin in this South American nation is a prohibitive $246,530.74, making this activity very unprofitable. The price of electricity is so high that in order to mine a single bitcoin, miners would have to spend $225,667.05.

By contrast, Bitcoin mining in Kuwait is the most cost-effective option worldwide. One bitcoin may be mined for $1,393.95 in Kuwait, giving miners a potential profit of $19,469.74. The average cost of a kilowatt-hour (kWh) of power in this Middle Eastern nation is under 3 cents. To put it in perspective, a single kilowatt-hour of electricity costs around 21 cents in North America.
The initial investment in bitcoin mining may seem high, yet many individuals still think it’s worthwhile. An attractive feature of bitcoin is its limited supply; only 21,000,000 bitcoins will ever be issued, and more than 19,000,000 have already been mined as of the writing of this article.

Although bitcoin (BTC) prices are notoriously unpredictable, their value has increased substantially over the last decade. Bitcoin’s price might rise much more if popular use of cryptocurrencies materializes, as many anticipate.