After failing to cross above $10,000 level, selling pressure on Bitcoin (BTC) increased once again, leading to a decline below $9,000.

In fact, the numero uno cryptocurrency, in terms of market capitalization, declined to $8,835 today morning before recovering slightly to trade at $8,915 at the time of writing this article (reflecting a gain of 1.7% in the past 24 hours).

Crypto enthusiasts are afraid that we may see another steep decline in the BTC price.

The decline below $9,000 was accompanies a sharp rise in inflow of BTC into various cryptocurrency exchanges. Bitcoin on-data signaled that major players were offloading their holdings during the weekend.

The data also indicates that a combination of selling by exchanges, retail investors and miners could have triggered the downtrend in the price of Bitcoin in the past three days.

As cryptocurrency investor Willy Woo earlier detailed, the main job of an exchange is to seamlessly match orders placed by buyers and sellers.

As an illustration, if a buyer places a bid to purchase Bitcoin at $9,000, a sell order needs to be there for the trade to get executed.

Post this 2020 halvening miners will cease to be the biggest sellers of Bitcoin. It’ll be the dawn of the crypto exchange as the leading seller.

The biggest sell pressure on Bitcoin will soon be from exchanges selling their BTC fees collected into fiat.

When miners liquidate the BTC generated as reward for validation of block and exchanges convert their BTC received as fees, there will be external downward pressure on Bitcoin’s price.

As per data provided by CryptoQuant, the inflow of Bitcoin to exchanges surged to 2,435 BTC on May 24. That implies roughly $22 million worth BTC was routed to the exchanges in a matter of 24 hours.

The statistics indicates cryptocurrency exchanges likely did not register a big share of selling pressure that happened during the weekend.

For cryptocurrency exchanges to lead the rebound, the quantum of BTC routed to the exchanges need to remain on the lower side. 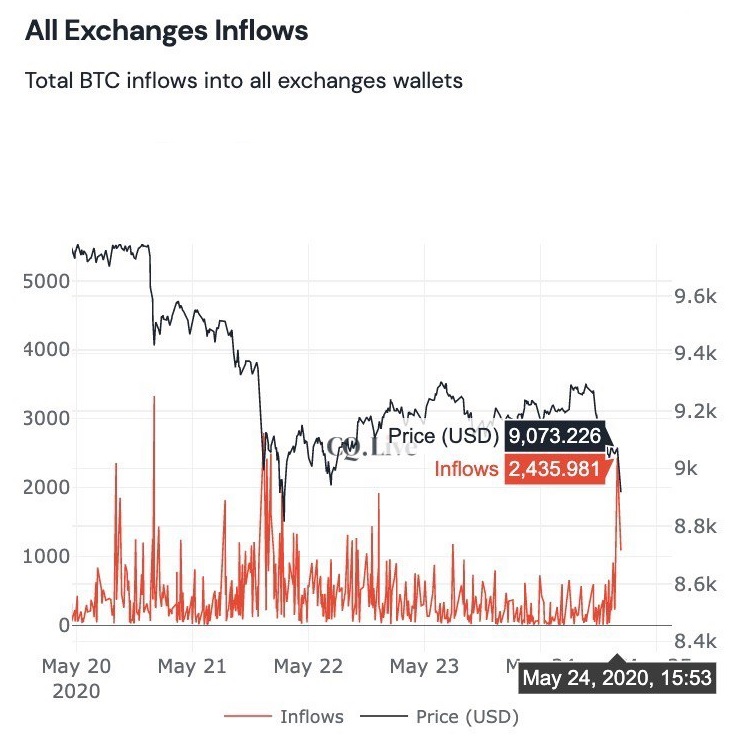 Cryptocurrency trading platforms make profit from trading fees in the form of cryptos. An exchange can convert their fees, which is held as BTC, in their own exchange, without a need to move the BTC anywhere else.

After considering all the info mentioned above, it is clear that miners and retail investors are the ones who had played a major part in BTC’s decline. Even the on-chain data confirms the argument.

Large miners who operate in Sichuan, China, the prevailing rainy season will permit them to realize cost effective electricity rates.

This implies that a few of the mining centers will also be able to receive a rate of $0.03/KW for electricity, bringing down mining cost to roughly $6,000.

In case of miners outside China, with over-leveraged or have negligible capacity, nevertheless, the halving event could have a considerable negative effect on profit margins.

Still, it is not clear whether miners are liquidating more than they mine as the BTC is trading higher than the breakeven cost of mining in China or miners are capitalizing by using higher-leverage.

However, data indicates that BTC sell off is mainly led by miners, with most of the liquidations done between $9,300 and $9,400.

PayPal to Unveil Crypto ‘Super App’ in the Months Ahead