Vitalik Buterin said in a latest interview with opinion journalist Noah Smith that he anticipated the bitcoin bull market will ultimately collapse. He stated that he had begun to see individuals who believed these exorbitant costs to be the “new standard.” Nevertheless, he recognized that the situation would not last for forever.

Additionally, he said that crypto booms often last a maximum of nine months. Buterin claimed that the prior rise had lasted for almost a year and a half too long. The Canadian programmer has consistently attributed the magnitude of the latest current price reduction to cyclical forces. According to Buterin, low cryptocurrency prices are not symptomatic of any fundamental market faults.

The Terra collapse earlier in 2022 is an illustration of an untenable business strategy that only flourished during the bull run and then imploded. The price of ETH has struggled to rebound prior to the merge update, falling 67.44% from its historic level.

Buterin predicted that cryptos would stabilize and become about as fluctuating as gold or the equity markets in the medium run. At what degree they will settle down is the subject of discussion. The Canadian coder thinks that the likelihood of crypto disappearing or taking over the globe in 20 years would be minimal if it succeeds in specialized industries such as value storage and transforms as the “Linux of finance.”

Bloomberg reports that the price of Ethereum, which reached $2,000 in July, may shortly fall to $1,000 or lower. The following graphs demonstrate the same: 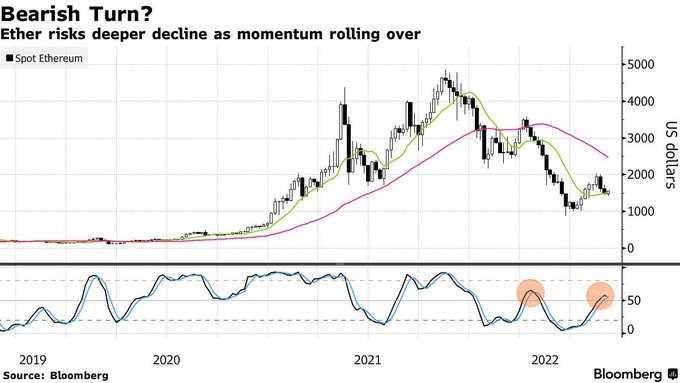 Bloomberg also highlighted technical signs indicating that ETH’s decline from its peak of $2,000 in August to its current price of $1,588 may go considerably lower. Notwithstanding the imminent Merge update, it is possible for the price to drop.