After surpassing the significant barrier of $2,000, Ethereum has had a little stumble and manages to trade in the positive region during today’s early trade. The crypto is in the forefront of the present crypto market recovery and is primed for more gains.

While preparing this report, Ethereum (ETH) is trading at $1,989, representing a 24-hour and 7-day gain of 0.7% and 17.5%, respectively. Only Solana (SOL) and Cardano (ADA) had double-digit price increases during the same time as Ethereum (ETH).

The trading company QCP Capital expects the bullish trend to continue due to favorable macroeconomic fundamentals. The cryptocurrency surge began a week ago when the US released the Consumer Price Index (CPI) for July, a gauge of dollar inflation.

According to QCP Capital, the statistic was about 8.5% and “reaffirms the top inflation scenario.” Since a result, market players anticipate a slightly lower aggressive Federal Reserve (Fed) as inflation seems to be declining.

The trading platform stated, “This has caused the market to price in a more subdued Federal Reserve, generating positive momentum that is expected to last through the next FOMC policy meeting on September 22. Rest of the macroeconomic factors in the forthcoming weeks might adversely influence market players’ opinions of the Fed. Nonetheless, according to QCP Capital, the market will “stay supported anyway.”

A potential date for the mainnet deployment of “The Merge,” the scenario that will conclude ETH’s shift to a Proof-of-Stake (PoS) consensus, doubles the optimistic storyline for Ethereum’s price. The incident is anticipated to occur between September 15 and 16. This has caused an “unprecedented” change in the cryptocurrency options markets, as the total open interest (OI) for Ethereum (ETH) contracts has surpassed the open interest for Bitcoin (BTC). The first is worth $8 billion, while the latter is worth $5 billion. 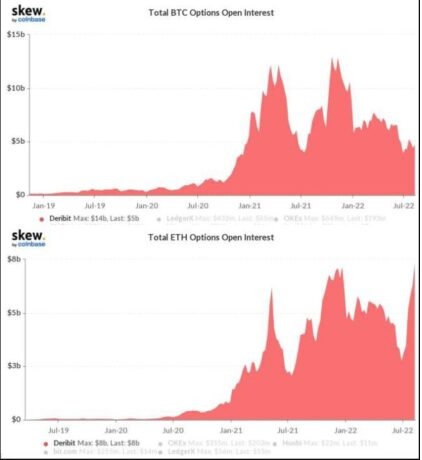 The aforementioned information may indicate that market investors are purchasing call options on Ethereum ahead of “The Merge” in anticipation of the initiative’s accomplishment. Material Indicators report indicates that investors with bid prices ranging from $1,000 to $100,000 have already been purchasing ETH on the spot market over the past week.

Further Material Indicators evidence reveals that the price of ETH encounters little resistance on short time intervals north of $2,050. If bulls are able to drive the price above these levels, ETH may recapture its prior highs and transform a crucial barrier into support. 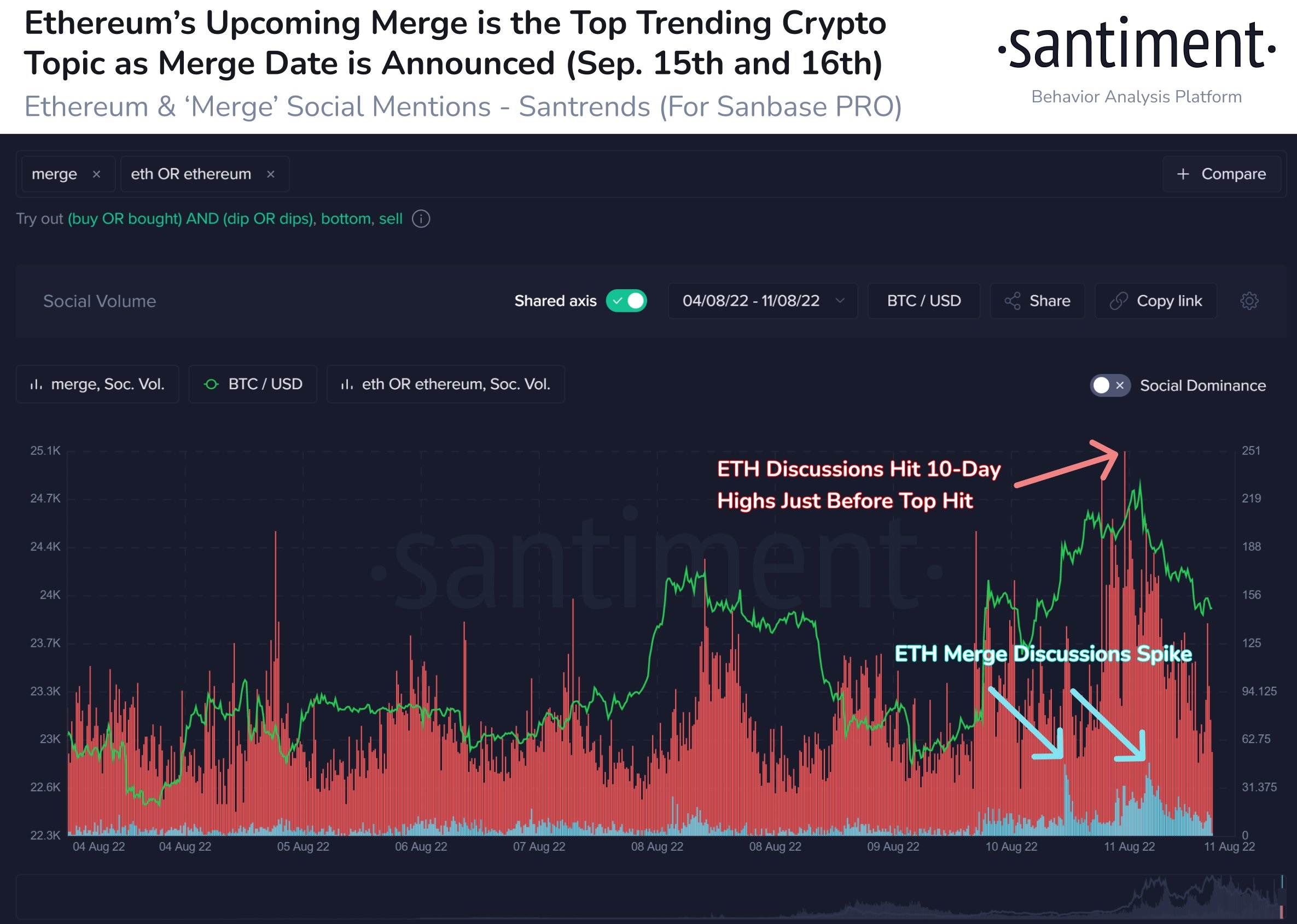 In anticipation of Ethereum’s (ETH) forthcoming transition from a proof-of-work (PoW) to a proof-of-stake (PoS) consensus protocol, cryptocurrency analytics startup Santiment is examining the top smart contract platform in depth. Based on a recent report, the data aggregator identifies social media conversation before the mid-September transfer to ETH 2.0 as a crucial signal of the cryptocurrency’s expected movement ahead of the upgrade.

“With Thursday’s ultimate Ethereum testnet integration, prices temporarily rose above $1,900.” The much-awaited ETH update will occur on September 15 or 16, according to developers. In advance of an event, price fluctuations will be determined by social volume. 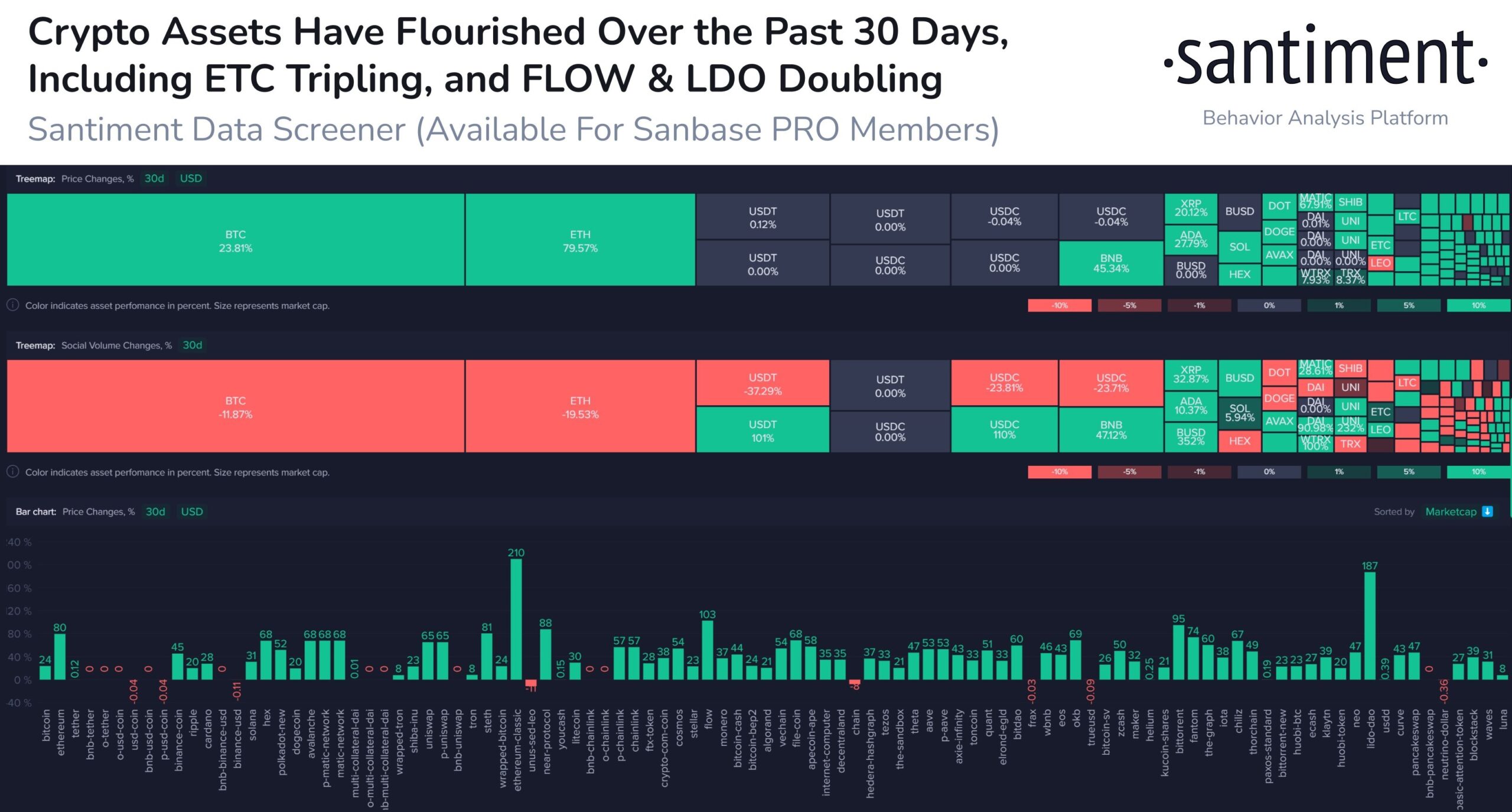 Santiment then reviews Ethereum and the whole altcoin market, concluding that notwithstanding a market-wide increase over the previous month, traders really aren’t acting in a manner that poses a danger of a flash collapse.

“Ethereum’s +80% price spike in the last previous 30 days has garnered the most publicity of any asset, but cryptocurrencies in principle have been in a terrific position since the final leg of June. Also, there is no tremendous enthusiasm, which is an indication that things may continue.” 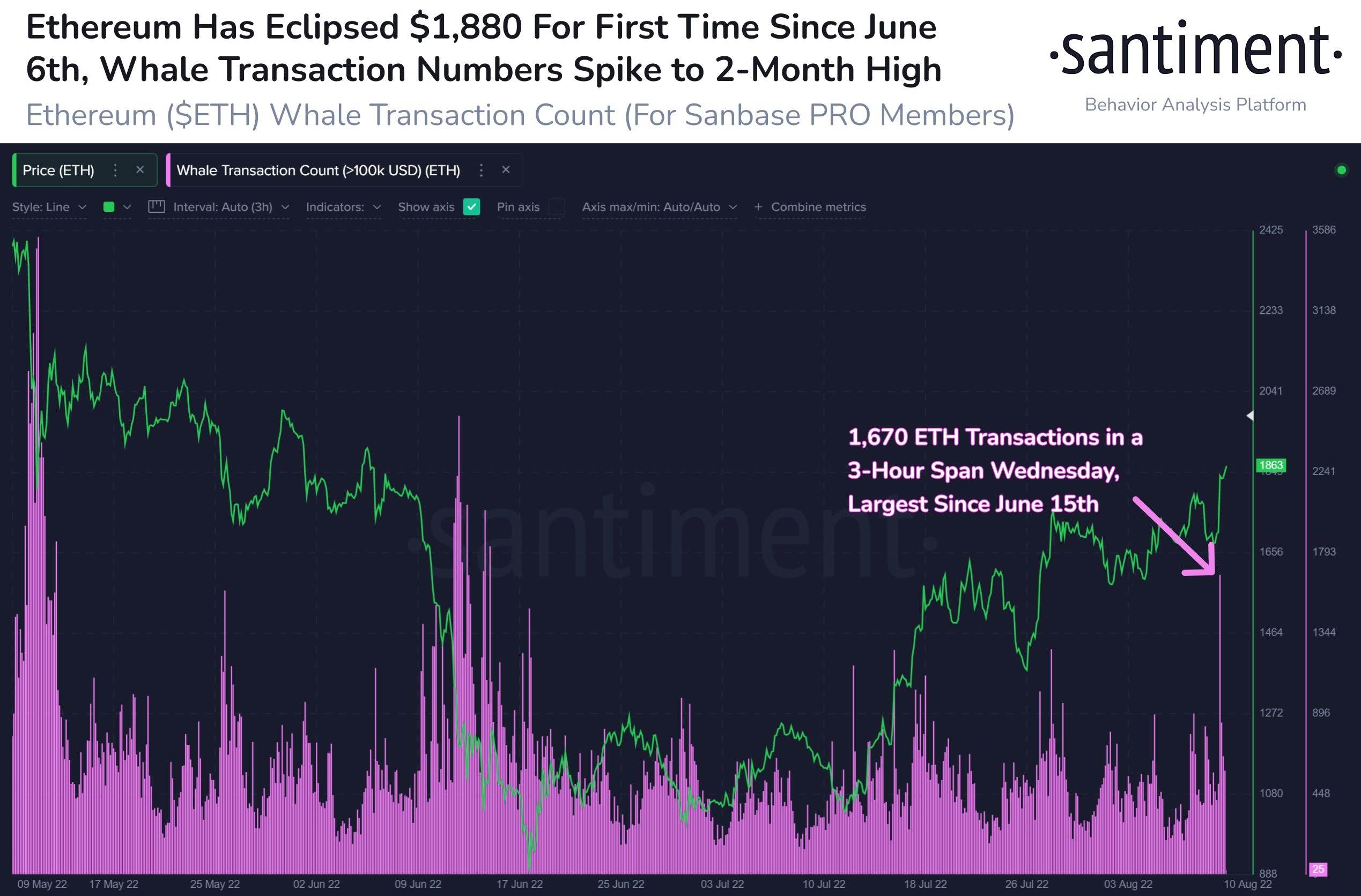 Santiment provides two conclusions regarding Ethereum based on a thorough examination of the charts, showing that ETH continues on an upward trajectory.

“Ethereum climbed back beyond $1,880 following Wednesday’s bullish CPI news. This two-month price peak was accompanied by a significant increase in ETH trades of $100,000 or more. This is occurring along with what seems to be an accumulation of whale addresses.” 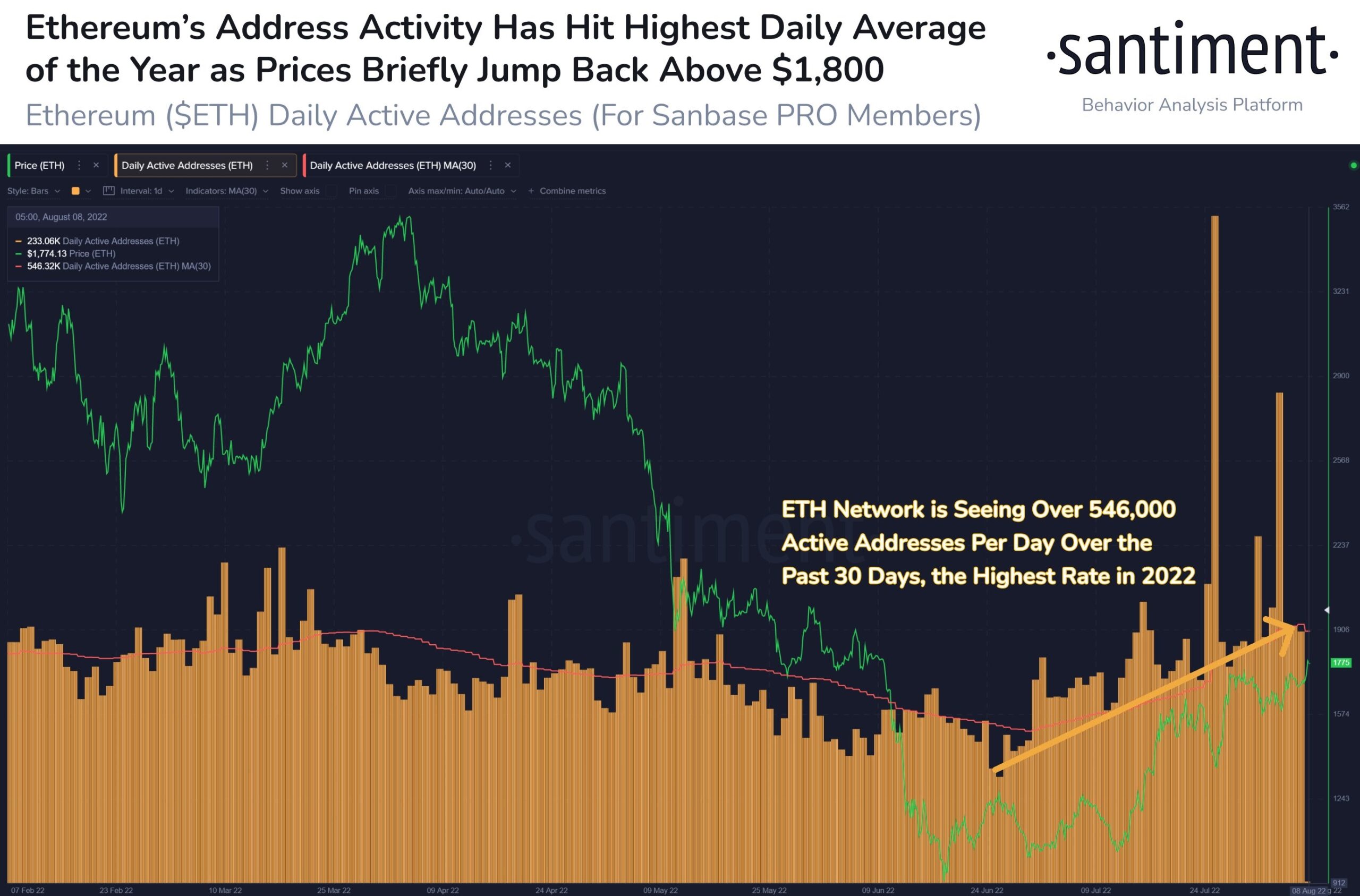 A few days before, the analytics company drew attention to the Ethereum platform reaching an annual landmark by averaging upwards of 546,000 daily active addresses during the previous month, coinciding with its price surpassing $1,800 in two months.

“Today, Ethereum surpassed $1,800 for the initial time in about two months. Fueled by a continually increasing number of unique addresses engaging on the ETH network, the continuation of the rebound is contingent on BTC being reasonably steady and trader FOMO being addressed.”

Ethereum’s price has risen to $1,963 during the last twenty-four hours, an increase of 4.30 percent from the previous day.