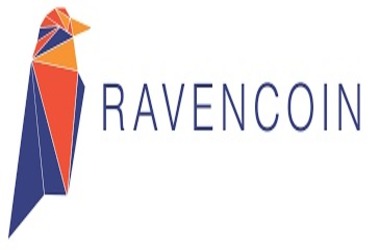 Ravencoin RVN/USD is soaring in tandem with Terra Classic. In the last week, RVN has gained 89.60%. While preparing this report, the token has risen by 20.36% to $0.05387 in 24 hours. Therefore, what factors are influencing the value of the 79th-ranked crypto by market capitalization? Let’s begin by analyzing what Ravencoin is and its function inside the crypto environment.

Ravencoin is the offspring of Bitcoin, with the blockchain being just four years old since its creation in April 2018. The blockchain has the majority of Bitcoin’s functionality. Consequently, it utilizes the Proof-of-Work consensus process and experiences periodic halvings.

The whitepaper for Ravencoin says that it is a blockchain-powered ecosystem. It let both users and programmers to create tokens for any asset of their choosing. The capacity to produce a token from nearly anything constitutes the primary value proposition of the network. The tokens may then be transferred to other parties using the Ravencoin platform.

RVN has been on an uptrend in recent times, but it is a shadow of its earlier glory. While preparing this report, the price of the crypto was $0.044, the highest since May. Although crypto asset recovery boosted RVN, heightened speculation also contributed to the most recent uptick. Prior to Ethereum’s transition to Proof-of-Stake consensus, PoW miners are exploring options.

In the shift of PoW miners, investors see Ravencoin as a preferable option to Bitcoin. This is due to the network’s reduced prices and higher speeds. In some ways, RVN investors are following a similar script as Ethereum Classic supporters. 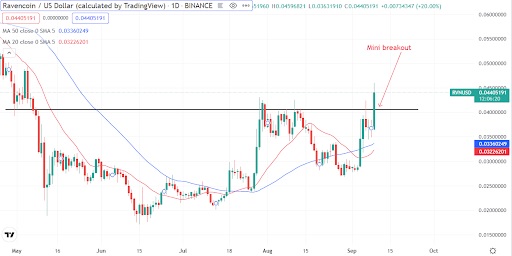 Technically speaking, RVN has effectively surpassed the $0.04 resistance level. As Ethereum Merge looms, traders will maintain attention on the level. With more fluctuation, the token’s price may continue to rise. The next resistance is $0.05.

The price of Ravencoin is increasing because to escalating speculation that it would draw PoW miners from Ethereum. The coin continues to be very subject to volatility. $0.04 is the support level to monitor by buyers.