Bitcoin, the numero uno cryptocurrency by market capitalization, has recorded a new 52-week low amid a huge crypto market sell-off. Today, Bitcoin (BTC) dropped by 8.8% percent to trade below $3,500 at $3,408 surpassing the prior low of $3,640.

In the last 24 hours, Bitcoin’s market capitalization has dropped by roughly $4.6 billion. Furthermore, the crypto’s market cap has been eroded by more than $12 billion for the week.

The selling pressure increased when Bitcoin broke the $6,000 support level last month. The bearishness seen in the Bitcoin was largely mirrored by the wider cryptocurrency market.

Bitcoin has now wiped off a major portion of its 4Q17 bull-run gains and is effectively down 84.3% from its all-time high of $19,781. Furthermore, Bitcoin has lost 64% on y-o-y basis. It is obvious that other altcoins are being dragged down along with Bitcoin. Ethereum blockchain’s Ether (ETH) is down 13% in the past 24 hours to trade at $86.30 levels. Stellar (XLM) and Bitcoin Cash (BCH) have lost near similar percentage to trade at about $0.11 and $103, respectively. Surprisingly, Bitcoin SV has gained 10% over the past 24 hours to trade at $103.85. 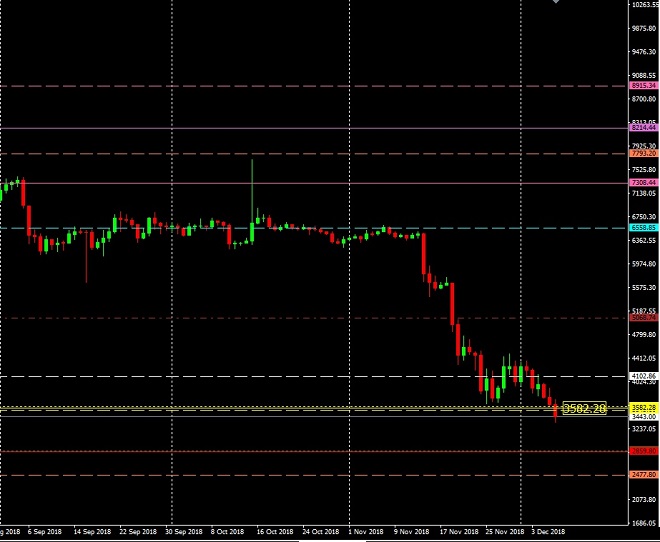 Technically, the price chart indicates major resistance for Bitcoin at 3,582. If the cryptocurrency is unable to cross the level in the next two days, then it may test the next support at 2859. Below that, traders can anticipate buying to come at 2477 levels. A firm close above 3,913 will improve the chances of a technical reversal.