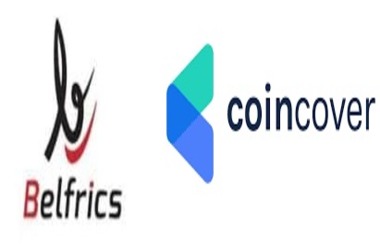 Belfrics was founded in 2014 and has operations in seven countries, including India. Coincover is the world’s first supplier of bitcoin protection. According to new statistics from TripleA, India currently has the highest number of cryptocurrency owners in the world, with over 100 million people, or 7.3 percent of the population, holding cryptocurrencies.

Belfrics’ blockchain has been acknowledged by Gartner as a top ten blockchain in terms of real-world applications and has been granted a patent by the Nigerian patent office for its Belrium KYC verification System (BKVS).

Demand continues to rise as more Indians work for multinational corporations and want to be compensated in cryptocurrency rather than conventional currencies due to the simplicity of performing international transactions and reduced transaction costs compared to bank transfers.

In the past year, the overall amount of crypto transactions in India has climbed by 30%. Coincover Consumer Protect is an insurance-backed guarantee designed to safeguard cryptocurrency investors from hacks, frauds, theft, malware, phishing, and brute force assaults. Consumer Protect monitors and restricts client transactions to assist prevent fraudulent conduct and is covered by Lloyd’s of London insurance in the event of a loss.

“We are delighted to assist Belfrics in protecting their customers’ cryptocurrency assets,” stated David Janczewski, Coincover’s co-founder and CEO. “Our technology gives investors with peace of mind and will help Belfrics to differentiate themselves in India.”

According to research, demand for crypto and blockchain technology will continue to expand tremendously over the next three years, growing from $3 billion USD in 2020 to $39.7 billion USD in 2025. By 2030, blockchain technology is expected to generate an additional $3.1 trillion in value to enterprises (mainly in the financial, private, healthcare, and retail sectors).

“We are pleased to assist Belfrics in protecting their customers’ cryptocurrency money. Our platform gives investors and regulators with peace of mind, and will help Belfrics to attract new clients to cryptocurrency,” stated Coincover CEO David Janczewski.

“Over the last 18 months, global growth has been spectacular, and Coincover is assisting investors in entering this high-growth sector by limiting risk and enhancing knowledge. Crypto continues to gain acceptability internationally, and adoption in India is rising,” said Praveen Kumar, founder and CEO of Belfrics Global.

India, with a population of 1.38 billion, has the potential for tremendous expansion over the next several years. By eliminating ambiguity and risk, Coincover helps us to better attract prospective cryptocurrency investors.

“We feel that providing this guarantee would attract a new class of investors to bitcoin in India.”

One of the key worries of investors is the platform’s protection of their investments. Regulated exchanges, like other financial institutions, are obligated to separate the assets of its customers and enterprises. Clients’ assets, including digital assets, are held in segregated accounts and wallets administered by a linked corporation controlled by the exchange.

“Typically, assets like as cash, bonds, or equities are kept by a third-party custodian, such as a bank,” Life Clips CEO Robert Grinberg said. This is not the case, however, with digital assets. Cryptocurrencies such as Bitcoin, Ethereum, and Belrium are qualitatively distinct from conventional assets. They are based on blockchain technology and are administered using private keys. “The safeguarding of our customers’ assets will always be a top priority. This cooperation with Coincover Technology adds an additional degree of safety for Belfrics’ consumers.”