According to recent research by Sky News, the crypto world appears to be sobering over a year. In the last year, at least 340 registered companies in the United Kingdom with links to blockchain or cryptocurrency broke down after launching at the peak of the crypto boom.

The end of gold rush has seen many of the crypto companies remove the words crypto and blockchain from their company names–this is the extent of the turning tide.

According to Sky News research, the business year 2017 – 2018 proved to be a short one for crypto-focused companies.

From the article:
“…at least 340 companies related to cryptocurrencies or blockchain were dissolved or liquidated this year, compared to 139 in the previous year. More than 200 of those companies were incorporated with Companies House during 2017, when the value of Bitcoin surged 1,500% through to its peak in December.”

Most of these liquidations (60%) occurred between June and November and were probably triggered by the fall of BTC to the $5,000 level towards the end of June. And in a very rare way, the number of companies that are dissolved now exceeds the number that is registered in the blockchain area, at least in the UK.

As a perfect example of the sharp change of direction in terms of the reputation of cryptography: only last year the company Long Island Iced Tea changed its name to Long Blockchain and its stock increased by nearly 300%. 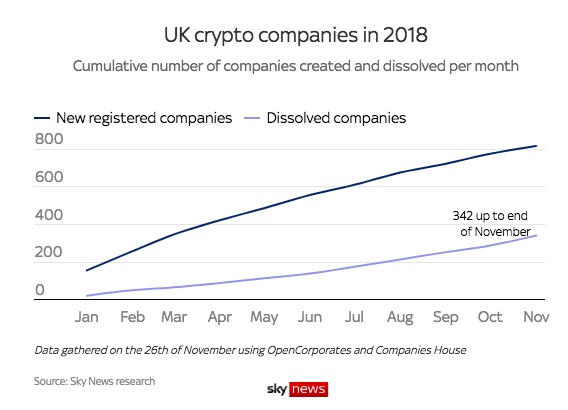 But now, Sky report points out those companies are desperate to get rid of words crypto and blockchain from their name as quickly as they can:

“Of the businesses which haven’t been dissolved, Sky News has found more than 50 which have changed their names to no-longer reference Bitcoin, blockchain, or cryptocurrencies. The chief executive of one business said this was because opening a bank account with one of those words in the company name proved a nightmare – although Sky News identified hundreds of other businesses with similar titles.”

Is it really surprising that opportunists who entered the crypto space when the price was low would leave? It is worth remembering that many of these companies would never have had a lasting impact on the cryptographic space. Any company requiring BTC to trade high just to exist does not have a very efficient business model.

Despite the turning of the public opinion on BTC and the cryptographic space in general, Bitcoin is still trading at a price higher than it had been for nine out of its 10 years. Ironically, it’s the best time for companies to move. But probably they’ll wait until it’s too late again.