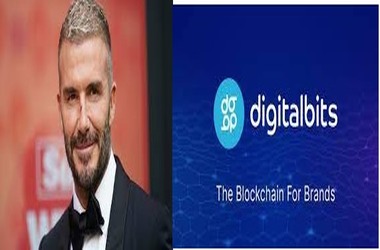 David Beckham, a worldwide athletic legend, businessman, and humanitarian, has joined the DigitalBits blockchain as its international brand ambassador. Beckham will assist to explain the disruptive potential of the DigitalBits blockchain to customers, companies, and other institutions across the globe as being one of the world’s most prominent sports personality and entrepreneur.

Beckham will begin on a number of interesting initiatives that will highlight the strength and possibilities of DigitalBits blockchain technology, which is speedy and environment friendly relative to several other networks, thanks to their mutual enthusiasm in innovative, accessible technology.

This worldwide relationship will foster unique methods for Beckham to engage with his audiences around the world while also driving advancement and sustainability in the industry. Beckham will draw on his significant expertise and contacts dealing with big companies such as Adidas, Maserati, Tudor, Sands, Diageo, and EA, as DigitalBits has earned a name for itself as the Blockchain for Brands.

Beckham’s social media presence is among the most prominent in the world, with over 138 million followers. His yearly engagements on Instagram, Facebook, and the Chinese networks such as Weibo and Douyin exceed 9 billion, with Weibo and Douyin having the greatest interaction of any foreign account. He is by far the most followed and connected person in the United Kingdom on social networking sites.

Beckham’s desire to engage with his followers in novel and interesting methods is at the heart of this effort. Celebrities and brands may connect with supporters and followers using blockchain technology, producing digital content such as NFTs that can accurately represent emotional and unforgettable events on a whole nother height.

Beckham will introduce a collection of NFTs as well as other Blockchain-powered digital assets, solely produced on the environment friendly DigitalBits blockchain, to provide amazing experiences for supporters throughout the globe, as portion of his dedication to technological advancement.

David Beckham said, “I’m constantly looking for new methods to interact with my global audience. I understood as soon as I met with Al as well as the DigitalBits team that this would be a huge potential for me to build new digital experiences for my supporters. I’ve always chosen to take satisfaction in dealing with the greatest teams, and I’m looking forward to working on my NFT lines and other future breakthroughs.”

Al Burgio, Founder of the DigitalBits blockchain, said “I am ecstatic to announce David Beckham as a Global Brand Ambassador for DigitalBits. I’m excited to collaborate with Beckham to expose Blockchain’s disruptive potential to a wider public and assist people all across the globe see its genuine potential.”