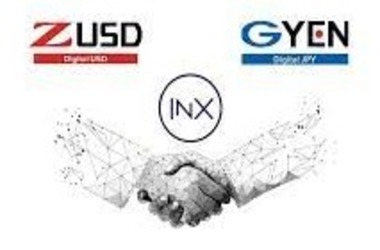 GMO Group owns and runs the world’s biggest online FX trading platform in terms of volume, as well as a Japanese-regulated internet bank, a cryptocurrency exchange, a cryptocurrency mining business, and a payment gateway service.

GMO Click Securities, GMO Group’s forex subsidiary, has been rated the biggest forex broker in the world by volume for the bulk of the past decade, with monthly volumes regularly above $1 trillion1. GMO Trust was formed as a limited purpose trust corporation regulated in New York to extend GMO Group’s cryptocurrency presence, and GYEN and ZUSD were released.

Daily FX turnover exceeds $6.6 trillion, with the US Dollar against the Japanese Yen (USDJPY) being the second most traded currency pair behind the Euro versus the US Dollar (EURUSD). With the launch of this Japanese Yen stablecoin on INXD, millions of retail and thousands of institutional FX traders will be able to invest and speculate in an innovative asset class and new trading venue with no closing hours.

It also offers business customers a new, more efficient Japanese Yen-backed payment option with immediate settlement in digital wallets rather than the conventional market T+2 encountered in the underlying asset. GYEN and ZUSD will be traded against the US Dollar and Bitcoin initially, with more pairings added in the future, and unlike conventional FX markets, this digital version will be available on weekends and holidays as well!

With the issue of approximately $113 billion in stablecoins, stablecoins are already gaining momentum as an alternative payment mechanism. Earlier in 2021, the US federal banking regulator, the Office of Comptroller and Currency, confirmed that banks may utilize stablecoins to enable payments to clients, citing the speed and efficiency of such instruments in comparison to more conventional payment methods.

“INX is pleased to collaborate with GMO, a global financial services behemoth that is launching financial-grade stablecoins. GMO has a highly synergistic portfolio of companies that immediately match with our client base, which we are perfectly positioned to serve on the digital asset side as a US regulated cryptocurrency platform,” said Shy Datika, founder and CEO of INX. “To put this in context, daily turnover in Bitcoin is approximately $40 billion, while it is closer to $750 billion in USDJPY. We are extremely pleased to finally bridge the FX and cryptocurrency sectors.”

“We are very excited to offer these stablecoins to INX’s industry-leading exchange, which is designed in line with top U.S. regulatory requirements. Traditional FX brokers are aggressively investigating digital FX 24 hours a day, 7 days a week using stablecoins. We are sure that the INX platform, with its advantages in compliance, safety, and technology, will attract the biggest financial companies.”