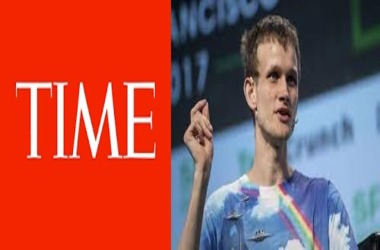 Time magazine chose Ethereum co-founder Vitalik Buterin, alongside artists, international leaders, campaigners, and many others, as the prominent person of 2020. Buterin is on Time’s list of 2021 visionaries, with Nvidia CEO Jensen Huang, Tesla CEO and Dogecoin (DOGE) supporter Elon Musk, and many others.

Reddit co-founder Alexis Ohanian highlighted Buterin’s involvement in growing the Ethereum blockchain to a market value of over $400 billion and promoting the creation of decentralized applications and non-fungible tokens(NFTs), in his biography on the Ethereum co-founder.

Ohanian stated “Really no individual could conceivably have put up with all of the applications for Ethereum, but it certainly requires one person’s concept to begin. From then, a distinct universe opened up, spawning new methods to use blockchain technology.”

The long-running publication seems to be becoming more receptive to both reporting on the cryptocurrency sector and embracing it in its own operations. In March, Time announced that it would be looking for a chief financial officer who is “familiar with Bitcoin and cryptocurrencies,” and it auctioned off three NFTs based on covers of magazines.

The magazine announced the subsequent month that it will take cryptocurrency payments for digital memberships, effectively integrating cryptocurrencies into its operations. Furthermore, as portion of a collaboration with investment manager Grayscale, Time said that it will be keeping Bitcoin (BTC) — obtained as payment for an instructional video series — on its financial statements.

“We aren’t even in the foremost stage of what we would like to accomplish with cryptocurrency,” president Keith Grossman stated in an interview on September 13. Since its inception in 1923, the magazine has turned out to be a fixture in the United States, covering important individuals and businesses. Time claims to have worldwide weekly subscribers of 20 million.