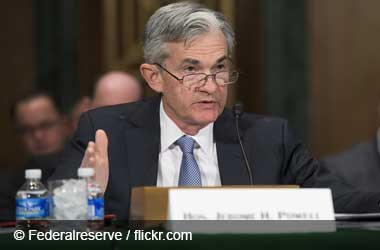 During a press conference telecast on PBS news hour, Jerome Powell, the head of the US Federal Reserve, has stated that he sees both possible advantages and dangers to the recently launched cryptocurrency venture Libra.

The Fed chair was queried whether he is worried that Facebook’s crypto Libra could weaken the Fed and tarnish its ability to have an impact on the economy.

Powell answered that there is a long way to go before society even consider accepting digital currencies in lieu of government backed fiat money. Furthermore, he stated that the Fed is not concerned about any hurdles that may come up in implementing monetary policy as digital currencies are in their infant stage.

Powell asserted that Facebook was in touch with them to exchange views about its venture with the Fed, citing that the social media platform provider has supposedly “Made quite broad rounds around the world with regulators, supervisors and lots of people to discuss their plans and that certainly include us. It’s something we’re looking at, we meet with a broad range of private sector firms all the time on financial technology and there’s just a tremendous amount of innovation going on out there.”

Additionally, Powell stated that he feels that there are both advantages and dangers specifically from cryptocurrencies such as the one from Facebook as the application has huge potential. He also shared views similar to that of Bank of England (BoE) governor Mark Carney who said that “we will wind up having quite high expectations from a safety and soundness and regulatory standpoint if they do decide to go forward with something.”

Regarding the query on the need for Libra to come under regulatory overview, Powell said

“We don’t have plenary authority over cryptocurrencies as such. They play into our world through consumer protection and money laundering […] but I would say that through international forums we have significant input into the payment system and […] play an important role in the payment system here in the United States.”

Government officials across the world have voiced a gamut of opinions on Libra, which could be exposed to over 2.70 billion people every month. The chairwoman of the US Financial Services Committee has called for suspension of the Libra project, soon after the white paper was published. Testimony about the venture is anticipated to be heard by the US Senate’s Banking Committee on July 16.

Bruno Le Maire, French Minister of the Economy and Finance has stated that the government aims to “ask for guarantees” from Facebook with regard to the stablecoin. In the meantime, Anatoly Aksakov, the Chairman of the Russian State Duma Committee on Financial Market, has stated that the country would not approve the use of the token.