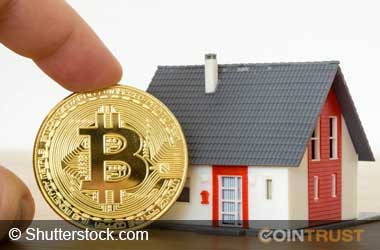 With Bitcoin becoming more mainstream, using it as a way to buy real estate is starting to become a trend in different parts of the world. Bitcoin has already been used to buy homes in a number of places including Dubai and the United States.

These homes are valued at around $20 million in Bitcoin, while a 27-acre property in Silicon Valley has been listed for sale in three different cryptocurrencies for the equivalent of $16 million in XRP, Bitcoin, and Ether.

While there are homes being listed for purchase via bitcoin, experts believe that purchasing real estate with bitcoin will not catch on in general. This is at least until blockchain technology is embraced by the global real estate industry.

Though many people focus on the use of bitcoin as a decentralized cryptocurrency, it is the blockchain that brings more to the table for the real estate market. For example, the Ethereum blockchain has Propy, which is an international real estate marketplace. It allows for value to be moved around globally, while also representing who owns a property. This allows for deed transfers to happen entirely online. The end result is that people are able to buy and sell properties without even leaving their couch.

Cryptoeconomics is when cryptocurrency systems are used as a decentralized network for a variety of uses in the economic system, instead of just using it an alternate way to pay. Integrating blockchain technology makes it more useful and familiar to buyers.

In a statement, Karl Floerch, a core researcher for the Ethereum Foundation said

Cryptoeconomics is like mechanism design. It starts with the desired end goal and works backwards to find the right set of mechanisms to align with the incentives of all participants in the system, to bring forth a common goal

The Propy platform emphasizes cryptoeconomics by giving incentives for users to list and share properties. Users get blockchain tokens that allow people use a variety of the platform's services. They can then be allowed to use title and ownership transfers. The tokens approach also gives incentives to ‘miners’ to process transactions quicker.