Dogecoin (DOGE), a cryptocurrency primarily used for tipping and donations, has gained more than 60% at the time of writing this article, along with a surge in trading volume, primarily driven by the launch of Dogethereum.

Dogecoin, as reader may be aware of, was introduced as a meme coin. The crypto uses a Shiba Inu dog as its logo.

Traders generally prefer to trade Doge/Bitcoin (BTC) and Doge/Tether (USDT) pair. Gate.io, Poloniex, Bittrex, and HitBTC contribute most of the trading volumes. With a market cap of about $754 million, Doge is now the 21st largest coin according to the data provided by Coingecko. 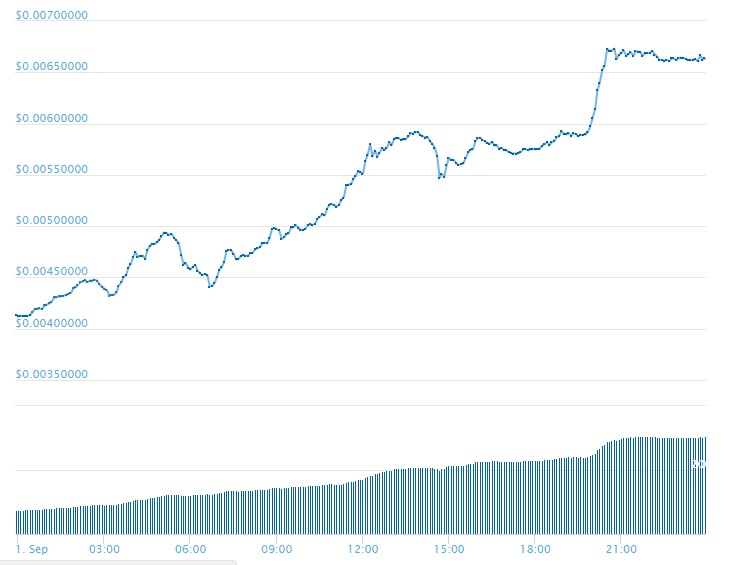 Many crypto enthusiasts and analysts believe that the spike was due to the launch of Dogethereum alpha on August 18. Dogethereum is a project that took shape from the thirteen month partnership between Doge and Ethereum communities.

The aim of the project is to integrate some features of Ethereum into Doge network, the most notable being the ability to deploy smart contracts.

Initially, both communities planned to split Doge chain through a hard fork, with DOGX being the ticker for the new crypto. However, in the best interest of Doge, the communities decided not to split the Doge chain.

Notably, a demonstration between Ethereum and Dogecoin blockchain is scheduled on September 5. In the meanwhile, Ethereum developers had a video conference in which they decided to modify the proposed “difficulty bomb” and the network’s block rewards. The meeting concluded with a decision to support EIP1234, which would reduce block rewards to 2ETH, from 3ETH and postpone the “difficulty bomb.”