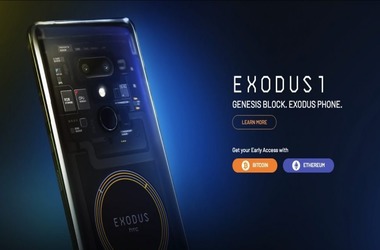 Taiwanese electronics giant HTC has tweeted regarding the presale of its popularly-discussed blockchain smartphone, Exodus 1. The announcement about the presale of Exodus 1 was officially announced during the Web3 summit that is scheduled for October 22-24 in Berlin.

At the time of writing this article, Exodus 1 can be booked by paying about $960 (0.15 BTC or 4.78 ETH). The shipping date is stated as December 2018. The official announcement on Twitter states that the firm is looking to collaborate with “a community of developers and enthusiasts […] to keep building security.”

Notably, HTC initially disclosed its plan to introduce blockchain-powered smartphone way back in May 2018. The firm then guaranteed that Exodus 1 would support “multiple blockchain protocols,” including Bitcoin, Ethereum, Dfinity network, Lightning Network (LN), and also boasted of a universal cryptocurrency wallet.

This is official early access release to the EXODUS 1. We are inviting a community of developers and enthusiasts to work with us to keep building security. Join us in rebuilding trust together, one phone at a time. Get your early access now! pic.twitter.com/sPcNc7wnzj

In July, HTC confirmed it intends to make available a native crypto wallet in its phone. The company also declared that it would support CryptoKitties, a distributed application program (DApp), which became popular for creating congestion on the Ethereum network. Later that month, Litecoin (LTC) founder Charlie Lee stated that he would offer consultation to HTC on the manufacture of the Blockchain smartphone.

However, the Exodus 1 offered currently is not exactly what HTC had guaranteed previously, as US tech magazine “The Verge” points out. When the announcement was made in May, according to The Verge, HTC’s “decentralized chief officer” Phil Chen had stated that each Exodus phone would work as a “node” to support Bitcoin trading. Chen had also stated that the phone would permit users to “own [their] own identity.”

The Verge has pointed out that the model offered currently provides a crypto wallet in a secure manner, but other promised features are reportedly lacking.