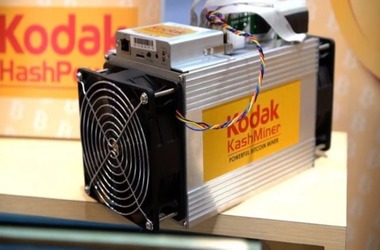 British Broadcasting Company, one of the popular news sources, has recently reported that a Kodak-branded “Bitcoin miner” has been identified to be a scam by cryptocurrency experts.

According to the article published by BBC, an unaccounted Kodak ‘KashMiner’ was seen on Kodak’s official stand at the CES technology event conducted in Las Vegas. The mining machine appeared when rumors about the launch of cryptocurrency ‘KodakCoin’ were flying high.

Later, it was revealed that “KashMiner”, which looked similar to Bitmain’s ASIC miner, was put on display by a firm named Spotlite USA, which licenses Kodak brand to display it on its products. When BBC team contacted Spotlite at the CES event, the firm told that it is offering the machines on rent for an upfront fee of $3,400.

Spotlite further claimed that the machine can generate revenue of $357 per month for the next two years. This means, a sum of ~$9,000 will be generated, if the machine works as advised, leading to a net profit of $5,600 for the party which lends the machine.

The returns from Bitcoin mining depends on a range of factors such as price of Bitcoin, transaction fees, energy price, mining difficulty and so on. Therefore, no one can guarantee fixed income from mining. Despite criticism, Spotlite’s chief executive Halston Mikali stated that the firm is moving forward with its plans to install hundreds of KashMiners in Kodak’s New York headquarters.

However, in an unexpected turn, Kodak’s spokesperson denied the grant of license for KashMiner, while pointing out that none of those mining machines are installed in the headquarters. The spokesperson said “While you saw units at CES from our licensee Spotlite, the KashMiner is not a Kodak brand licensed product. Units were not installed at our headquarters.”

Many crypto experts have branded “KashMiner” as a scam due to the doubtful appearance of the product and impossible profits. While pointing to the unprofessional looks of the company’s web page, David Gerard, a writer, stamped the scheme as “crypto-currency folly”.

Saifedean Ammous, an economist with interest in Bitcoin and other cryptocurrencies, said “There is no way your magical Kodak miner will make the same $375 every month.”

According to BBC, the scheme has already caught the attention of the US SEC, which has restricted the firm from moving ahead with the project, a clear indication that the regulators see it as a scam.
The firm now states that it intends to commence mining operation in Iceland, instead of renting it to clients.