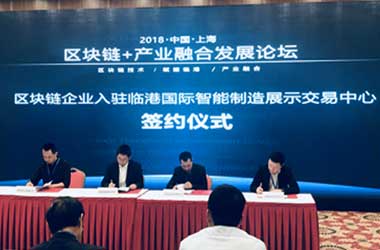 Under the partnership, Lingang’s platform will continuously feature Vechain along with other technological innovations backed by the Eastern China Tech Transfer Center and the government of Shanghai Lingang.

On May 25, the 2018, Blockchain & Industry Convergence Development Forum and the National Eastern Tech-Transfer Center Blockchain Research Lab Establishment Conference was held in Shanghai. The aim of the conference was to encourage blockchain innovation at industrial level. So, Kevin Feng, VeChain COO, attended the event as an honorary speaker based on invitation.

On the sidelines of the event, VeChain signed the agreement with Liangang International Intelligent Manufacturing Exhibition Trading Center. The collaboration will also quicken the reach and development of the VeChain Thor Platform. Using the partnership, the VeChainThor Blockchain team aims to establish its platform on a commercial scale to facilitate data transfer with organizations, and both inside and outside of government industries.

The Lingang District Development and Construction Management Committee and the National Eastern Tech-Transfer Center to mobilize global innovation resources established The Lingang International Intelligent Manufacturing Exhibition and Trade Center in order to open up the “last mile of scientific and technological achievements, and promote the transformation of scientific and technological innovation achievements.”

Shanghai’s Lingang Area is quickly turning out to become an international smart manufacturing center. It is creating five platforms to foster research and developments, and technological innovation.

Lingang Group, a large state-owned enterprise directly held by the Shanghai State-Owned Assets Supervision and Administration Commission, focuses on investment, development and operation of industrial parks and related supporting services in the park for the area. The company employs over 400,000 people, registering over 8,300 enterprises to their zones, and creating a GDP over 7,400 Billion RMB.

About The Eastern Technology Transfer Center