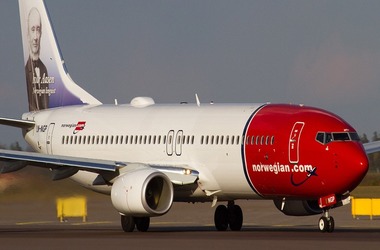 The exchange is currently owned by a firm named Observatoriet Invest. However, the ownership will soon be in the hands of Norwegian Air. This information was revealed by Stig Kjos-Mathisen, Kjos’ son-in-law and chairman of NBX.

NBX is planning to open a cryptocurrency exchange later this year and also intends to accept cryptocurrencies in its airlines business.

Commenting on the planned launch of cryptocurrency exchange Kjos-Mathisen said

“We’re looking at things that are easy to scale. Among other things, having a crypto currency as payment option in the airline. We see that there is a need for a serious marketplace where you can buy and sell cryptocurrencies.”

NBX aims to grow as big as GDAX and Kraken in course of time. As the third-largest low-cost airline in Europe, ninth-largest low-cost carrier in the world, and largest airline in Scandinavia, Norwegian Air Shuttle facilitated transportation of 30 million people in 2016. The airlines operate in Europe, Middle East, North Africa, and runs 500 routes to 150 destinations in 35 countries.

“One of the most important thing for us is to build an ecosystem around the solutions we develop. In particular, the ecosystem within the Norwegian group is important, but also ecosystems in the airline industry.”

Kjos-Mathisen has stated that he is not concerned about regulatory issues and revealed that he met financial regulators recently.

“It is not long since we met with the Financial supervisory authority. My impression is that they are positive about the technology and do not want to inhibit the adaptation, but they have a cautious approach.”

Kjos-Mathisen has also explained that KYC processes are much smoother for Norwegian customers as passports are registered on the system.