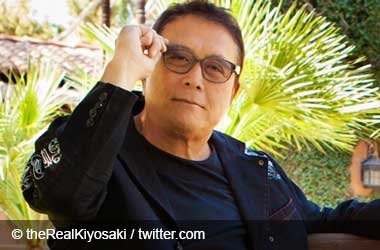 Robert Kiyosaki is not a new person to the financial sector.

A major advocate of property investment, the Vietnam veteran (and previous Marine helicopter gunship pilot) is additionally an enthusiast of digital currency.

Great crash is on its way

While talking to the Australian media, Robert Kiyosaki said that the biggest financial crash in the world history is on its way. He is not sure of the format in which it is going to arrive, but blames the mindless cash printing strategies of the US Federal Reserve for blowing the lid.

To manage the crash, Kiyosaki suggests gold, the yellow metal. He says:

I’ve always been a gold bug. My latest book coming out is called Fake. There’s so much fake money. In 1971 Nixon took the dollar off the gold standard and the US dollar became fake money.

The problem is it also became invisible, so they could print as much as they wanted. That’s why savers got wiped out. So for the average person, just buy some Aussie gold or silver coins from the Perth Mint. When the dollar goes down, gold goes up.

Kiyosaki, unlike other financial experts, is a major supporter of cryptocurrencies. According to him, there are three sorts of money today: God’s money, government money, and the general population’s money.

God’s cash is gold and silver. He says that both will exist even when cockroaches get wiped out. They do not have any end. Government cash is fiat money, for example, the dollar and euro. In addition, there is cryptocurrencies, which can be regarded as “people’s money.”

He goes further and states that printed fiat money is at risk, saying

I think the dollar is toast because Gold and Silver and cyber currency are going to take it out … The US dollar is a scam. I think we’re watching the end of the dollar. That’s what I’m saying.

It’s encouraging to see a popular, credible person in the financial world to have a bullish view of cryptocurrency. For several years, Kiyosaki has been sharing his knowledge for people to increase their financial IQ, which synchronizes perfectly with cryptocurrency sector.

Millennials are educating themselves about the opportunities and economic freedom offered by Bitcoin and other altcoins. Furthermore, the present generation youth does not hesitate to take risk while investing. Considering the huge change in the mind set, a number of schools and colleges are now teaching students about cryptocurrency and blockchain technology.