The price of Bitcoin (BTC) recorded a fresh all-time high of over $40,000 on January 7, after the price rallied by over $5,000 in less than a day. The level of $40,000 is a psychological barrier and perceived as a considerable landmark for the top-ranked crypto. As per Matt Blom, chief of international sales trading at Equos:

“Bitcoin’s march to $40k has been driven by fresh capital from huge hedge funds, corporate treasuries and awareness from the investing public that all is not well in the world of fiat. It’s easy to forget that we are still in the very early stages of adoption.”

Blom further advised investor to avoid guessing the top and should continue riding the trend.

Soon after Bitcoin touched $40,400, it came across considerable selling pressure that resulted in a sharp decline in price to about $36,600 before bulls entered to capitalize on the steep downtrend.

In the last 24 hours, Bitcoin’s volume recorded a fresh all-time high of $82.40 billion and several top cryptocurrency exchanges faced connectivity problems. Some even went offline for a while. Conventional markets also rallied as the US Congress endorsed Joe Biden’s victory, with Democrats taking control of both houses of Congress. 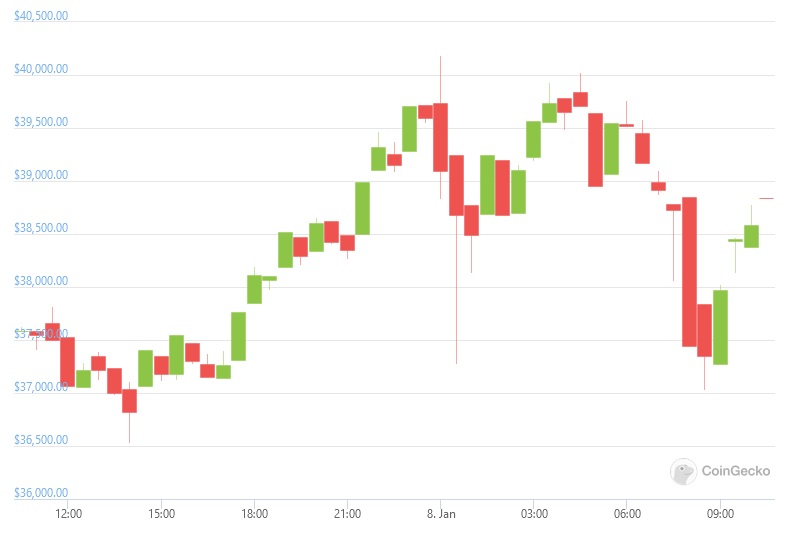 Other prominent gainers in the last 24 hours include Year.finance’s YFI and Nano, which have recorded increases of 20.93% and 77.33%, respectively. While several analysts forecast further rallies in Bitcoin, cryptocurrency trader and analyst Scott Melker suggested cautious approach. He said:

“Beyond being a psychological level and a round number, I don’t view 40K as particularly significant. From a technical perspective, there are no resistance ahead – just blue skies because Bitcoin is in parabolic price discovery. The expectation would certainly be that a major correction will eventually come, but it is a fool’s errand to try to time it or to assume that an arbitrary number like 40K will be the top.”