Bitcoin (BTC) recorded a new all-time high of $38,130 earlier today, just 5% away from next psychological level of $40,000. Data provided by Coin 360, Cointelegraph Markets and TradingView indicated that Bitcoin has rallied further, primarily due to uncertainty created in the US by protestors who entered into Capitol in Washington D.C.

After demonstrating strength for the past few days, BTC/USD rose sharply to hit the aforementioned all-time peak.

As per the recent updates related to order books, considerable resistance exists at $38,000, with further selling pressure starting at $39,500. There is no firm support above $31,000 level.

He further opined that there is a considerable change of a healthy price correction in the days ahead even though the current uptrend needs to be celebrated.

“Would that be bad? No, as the higher Bitcoin goes, the more money is into the markets and the more money can flow towards the altcoins from this perspective.”

The end of December was marked by the arrival of fresh funds in crypto sector and also from new retail investors who lack experience and driven by “FOMO”, as per Van de Poppe. 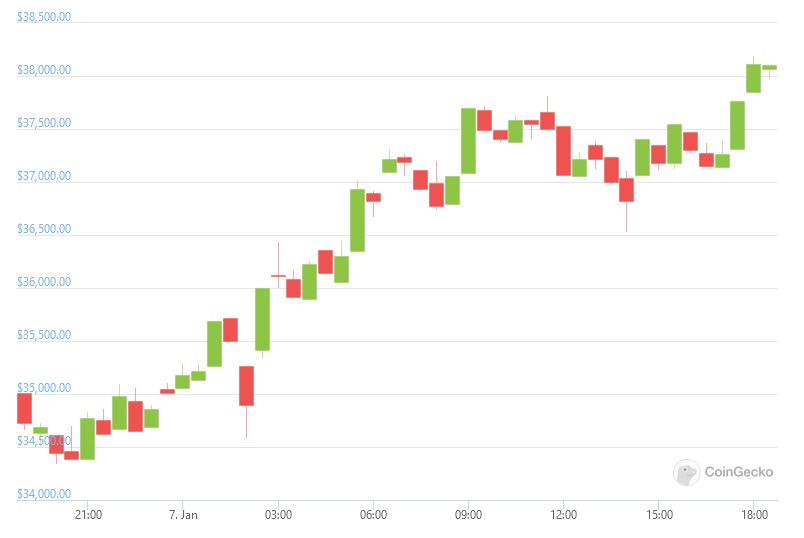 Regarding the latest investors, Van de Poppe stated that they suddenly felt the need to capitalize on the opportunity, after remaining uninterested when Bitcoin was trading at $10,000.