The dominance of Bitcoin (BTC) declined below 50% for a short span of time last week, the first of its kind since January 2018, providing a clear indication that market is increasing its speculative bets on altcoins.

The Bitcoin dominance index, which reflects Bitcoin’s market capitalization in comparison to the wider crypto market, hit a low of 49.35%. Notably, at the start of this year, the dominance rate of Bitcoin was 70.68%.

Ethereum (ETH), in the meantime, represented almost 15% of the aggregate market at its highest level on Thursday. The market dominance of Ethereum has increased roughly 4% since the beginning of this year.

ETH has surpassed Bitcoin over the last seven days, generating a significant return of 9.5%. Ether (ETH), which is the second-largest crypto in terms of market cap, is down by 10% from its record high price. Bitcoin, in the meantime, has lost 20% of its value.

The market share of Binance Coin (BNB) has also increased consistently in 2021, from 0.71% on January 1 to 4.17% on April 25. BNB is backed by multiple fundamental aspects, including rising adoption of the Binance platform and a concerted burning of BNB tokens worth $600 million in 1Q21.

In the meantime, cryptos that do not fall in the top 10 list by way of market cap have recorded their aggregate market cap increased to more than 18%, from less than 11% in January 1. Meltem Demirors, chief strategy officer of cryptocurrency investment manager CoinShares, stated that she is “seeing a lot of folks chasing returns by moving further out on the risk spectrum.”

Demirors also noticed that 94 cryptos currently have a market cap of $1 billion or more. While writing this article, the count of cryptos has declined to 87, as per data provided by CoinGecko.com. A further seven ventures were identified to have market cap of $900 million or higher. 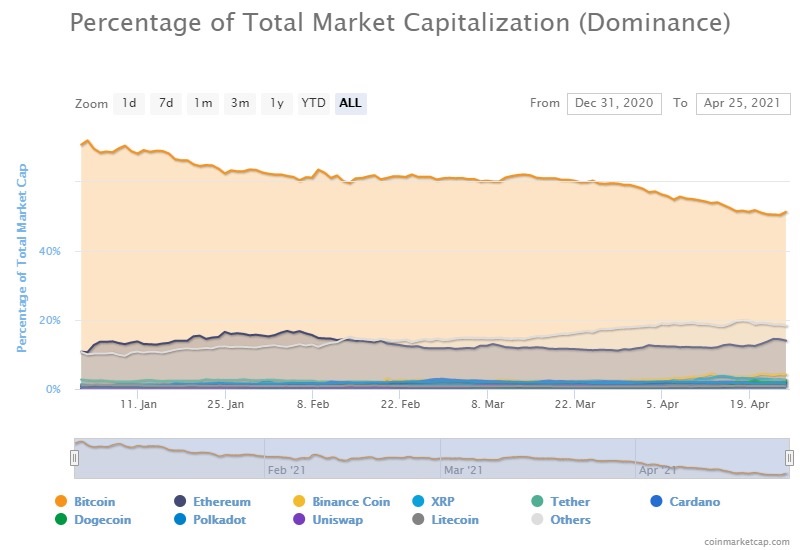 Analysts do not have similar opinion about the rate and timing of what is being referred to as the ‘alt season,’ a time frame in the market cycle witnessing sharp rise in the price of altcoins against the greenback and Bitcoin.

Ben Lilly, co-founder and analyst at Jarvis Labs, said last week that he does not feel that it is the apt time to move from Bitcoin to altcoins, considering the risk-weighted point of view.

2/ while bitcoin has seen a 25% sell off since last thursday, a larger rotation is under way

some coins didn’t sell off, but rallied, and HARD.

most of these trade only on crypto to crypto platforms, so its crypto rotation, not cash inflows driving these to new highs pic.twitter.com/UFDTtX3UNu

4/ look at the contrast between $LUNA and $BTC for example

not a judgment, simply an observation. trade pairs and market depth matter, esp in a low liquidity trade.

(sidebar: can anyone @coingecko explain why FTX is ranked 1 for bitcoin despite low volume? it’s very sus…) pic.twitter.com/RoHi2Mbxjp

6/ and also now i have to research wtf piratechain is, arrrrr, f*in’ crypto

In the meantime, a study by Filbfilb, co-founder of Decentrader trading suite, opined that we are on track towards seeing a major altcoin rally. The aggregate market cap of altcoins stands at $937 billion.