Bitcoin (BTC) has once again rebounded to $60,000 as the market turned volatile in accordance with expectations of analysts. Data provided by CoinGecko indicates a spike in the BTC/USD pair that enabled the crypto to break above the $50,000 to $60,000 channel Friday.

For weeks, the uptrend has been in the making. For many a time, the level proved to be hard to break. With Bitcoin (BTC) hovering around $60,000, traders hope that the crypto sustains above that level.

The image was certainly mind-boggling for traders who had been witnessing a range bound market for weeks, while hitting multi-week lows in between.

Clarity is yet to arrive on the momentum behind the recent increase and the ability to sustain above $60,000, which has turned into a major psychological resistance.

Bitcoin is about to Bitcoin. 🔥⤴️🚀 $BTC pic.twitter.com/8IY19LdtmB

A remarkable change was the considerable decline in financing rates among exchanges before the price of Bitcoin (BTC) broke above $60,000. However, financing rates surged after Bitcoin crossed the aforementioned level. Some crypto traders and enthusiasts such as Filbfilb, who co-founded trading suite Decentrader, has opined that Bitcoin at $58,000 looks similar to Bitcoin at $20,000.

While Bitcoin is grinding up to another ATH.

Being a bear is expensive. pic.twitter.com/SNHK9eviU1

He informed subscribers of his Telegram channel as follows:

“I’m still very bullish above 58K. Structure the same as at 20K IMO; a lot of other market nuances similar too in orderflow and depth.” 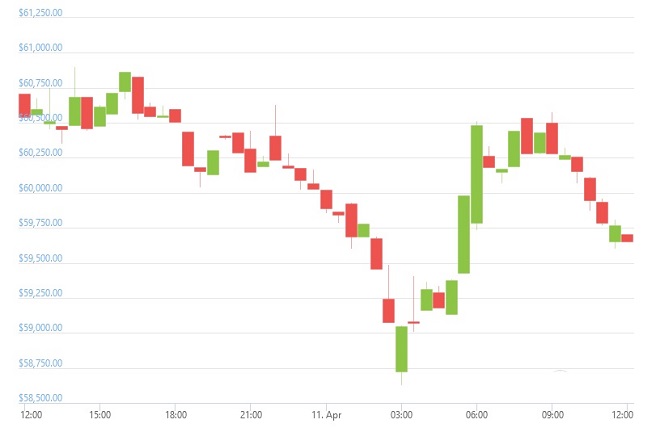 A day before, Philip Swift, another analyst at Decentrader, had echoed similar views, on the basis of developing cross patterns by two crucial moving averages. Specifically, Swift stated that BTC/USD have room to appreciate further. The two moving averages were 111-day and 350-day, with the latter multiplied by two, put together referred to as Pi Cycle.

In a market review, Swift wrote as follows:

“My current near-term market outlook for Bitcoin is neutral-bullish, so my personal view is that there is a good probability this is not the market cycle top for Bitcoin when the Pi Cycle Indicator moving averages cross in a few days’ time.”

“Other indicators and fundamentals are suggesting that we are not yet at the end of the market cycle.”

The rest accepted but were little prudent. This includes mathematician Willy Woo, who cautioned that Bitcoin could be forming a double top price pattern.

He collectively said “Volatility is visibly lower this cycle,” and further stated that following the clearance, the market capitalization of $1 trillion on the basis of Bitcoin’s price of roughly $53,600 has little probability of fading again.