Along with the continuous all-time high prices set by Bitcoin (BTC), the network hash rate is also recording new highs. As per data provided by Blockchain.com, the computed seven-day average hash rate of Bitcoin is currently 148 exahashes per second (EH/s).

The figure reflects the quantum of computing power spent by the systems employed by miners to safeguard the network per second.

Glassnode, which provides on-chain analytics data, through a tweet, has pointed out that Bitcoin posted its largest monthly (average) hash rate of 136 EH/s last month.

The prevailing hash rate growth is in line with the trend recorded since the beginning of November 2020, which correlates with the start of the current stunning rally that drove Bitcoin to over $35,000.

During that period, the network was recouping after a significant drop in hash rate caused by the seasonal relocation of miners in China at the end of Sichuan rainy season. Before the drop, the Bitcoin hash rate was at the earlier seven-day (average) all-time high of 146 EH/s, as per figures provided by Blockchain.com. 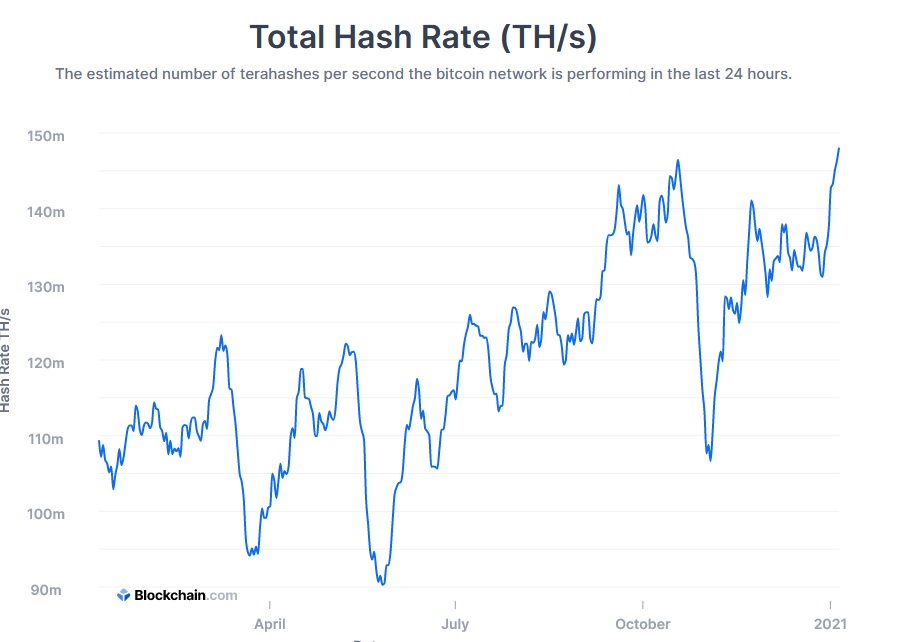 In case the current increase in hash rate sustains, the network could see an upward difficulty adjustment of over 10% at the forthcoming retargeting epoch, anticipated on Saturday.

The surge in hash rate is a notable illustration of the consistent strengthening of Bitcoin network’s fundamentals. Other measures such as network usage and activity are also increasing. As per data provided by Coin Metrics, the quantum of active Bitcoin addresses is on the verge of hitting a record high level of 1.19 million seen during December 2017 rally.

Bitcoin is also recording continuous rise in price after it broke the $10,000 price barrier in early October. The numero uno crypto by market cap recorded a fresh all-time high of $35, 895, before retracing below $35,000.