Native cryptocurrency of Cardano blockchain, ADA, has rallied over 100% in the last week as it eclipsed Bitcoin Cash (BCH) in terms of market cap to take the sixth place in the list of cryptos by market cap.

Secondly, Cardano is gearing up for some crucial protocol upgrades this year. Cardano rolled out Shelley mainnet last year, triggering the rise of Cardao as a PoS blockchain covenant.

Scholars at Binance Academy pointed out that the roll out of functional smart contracts is one of the steps involved in Goguen update. Taking into account the importance of the network upgrade, the crypto market’s view of ADA seems to have improved considerably. The document reads:

“As of December 2020, functional smart contracts cannot be deployed on the blockchain platform. As part of the roadmap, this will roll out as a part of the Goguen update. Following Goguen, the Basho era focuses on optimization of scalability and interoperability, and the Voltaire era introduces a treasury system to address governance.”

Cardano based smart contracts are different from the ones hosted on other blockchains because they permit developers to create smart contracts that execute by itself on the basis of programmed parameters. This permits flexibility in decentralized apps. Blockchain solutions provider Emurgo stated:

“These contracts, when written on the Cardano blockchain, offer the value of giving full visibility to all participants of the contract, while also being extremely secure and self-executing according to the programmed conditions.”

Even though Cardano has crucial upgrades coming up, there were no specific announcements regarding any of the larger upgrades during the course of the rally. Technical analysts and traders expected a big ADA rally in the final week of December, as crypto assets with large capitalization started appreciating alongside Bitcoin. 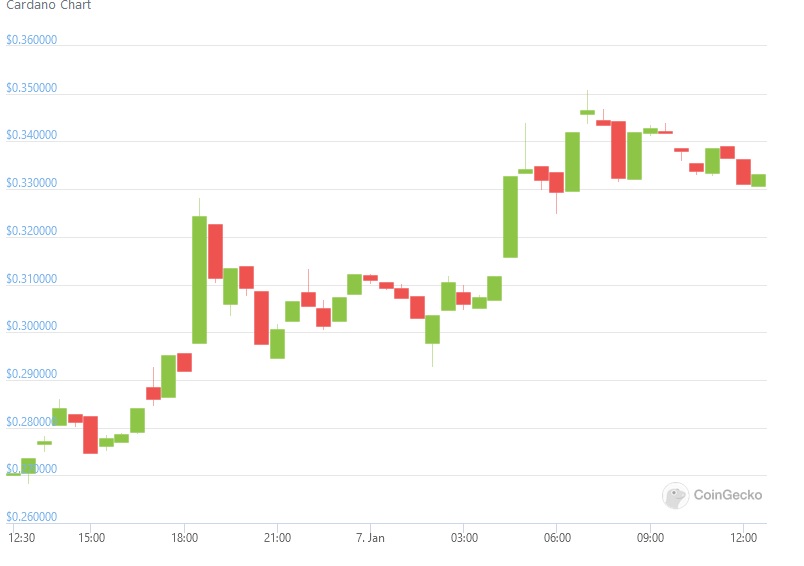 A professional trader at the Amsterdam Stock Exchange, Michael van de Poppe, tweeted December 30 that he expects Cardano to perform well in 1Q21. He wrote:

One of the platforms that will do well in coming quarter, I think will be #Cardano.

Majors are probably running first and this is definitely a major.

The rally was aided by a mixture of technical aspects and the anticipations of roll out of operational smart contracts this year. Analysts are of the view that altcoins such as Cardano will perform well in the short-term, provided Bitcoin trades above $34,000 and carries adequate technical momentum.