Ether (ETH) and Dogecoin (DOGE), two top cryptos, entered Google’s list of the world’s most researched phrases in 2021. Google revealed its annual ranking of the year’s top searches on Tuesday, segmenting them into numerous categories, such as searches, news, people, games, and movies.

Dogecoin took the fourth spot in the news search keyword on Google in 2021, both internationally and individually in the United States, as per Google Trends’ “Year in Search 2021.” The news article “Ethereum Price” was rated tenth.

The cryptocurrencies are featured among the most frequently searched news items, which include Afghanistan, the AMC stock, the COVID-19 vaccination, the GME stock, and the stimulus check. In 2020, not one cryptocurrency was included on the list. 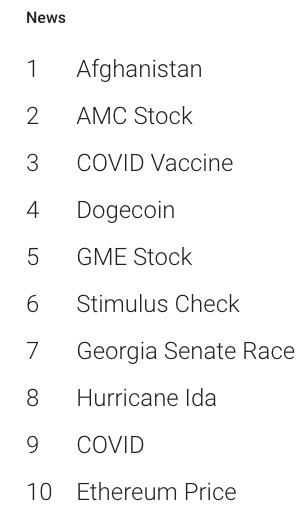 Notably, Bitcoin (BTC), the market’s most valuable cryptocurrency, is not included in any section of the “Year in Search 2021,” either globally or in the United States. Dogecoin, created in 2013, has risen to prominence as among the most popular cryptocurrencies in 2021, having just entered the top ten biggest cryptocurrencies by market valuation.

DOGE’s price has soared this year, mostly due to Elon Musk’s backing, who began aggressively pushing DOGE on Twitter in 2020. DOGE is up roughly 5,100 percent in the last 365 days, compared to 632 percent for Ether, according to CoinGecko statistics. In comparison, Bitcoin has increased by almost 160 percent over the last year.

El Salvador Offers Fuel Discount of $0.20 per Gallon When Paid in Bitcoin