Bitcoin (BTC) no longer used to have the same kind of correlation it had with gold earlier. In fact, the numero uno crypto’s correlation with S&P 500 index is increasing, as per academics at Kraken Intelligence, an associate firm of the US based Kraken cryptocurrency exchange.

The information was revealed in a document titled ‘Bitcoin Volatility Report’ in June 2020.

The aforesaid report, published on July 9, highlights a 31% decline in Bitcoin trading that caused Bitcoin’s annual volatility to hit a 6-month low, compared with 51% in June.

As per the report, the considerable decrease in volumes and volatility has made June a calm month for the first time in five months.

This has also created a key trend turnaround that very much affected Bitcoin’s price correlation with gold and stocks.

Per se, Bitcoin’s 30-day moving correlation with gold plummeted below its yearly average of 0.24 to reach -0.49, a four month low, as per academics. 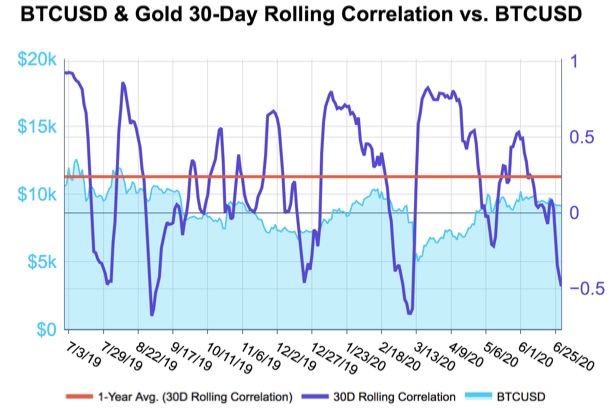 In the second half of May, the correlation turned positive and ended above 50, as per analysis report of Kraken Intelligence.

As Bitcoin continues to become highly correlated with S&P 500, it is losing correlation with the yellow metal. As per Kraken Intelligence, the price retreat seen in Bitcoin in the last two months has increased correlation with S&P 500, with correlation factor hitting 0.65 in late June. The monthly average jumped to 0.52 from a one-year average of 0.26.

“The last time we saw SPX and BTC 1M realized volatility spread this low was just prior to the March 12th BTC price crash.”

Back in June, stock-to-flow analyst PlanB argued that a strong correlation between Bitcoin and S&P 500 should have taken Bitcoin to $18,000.

El Salvador to airdrop $30 Worth Bitcoin to Residents